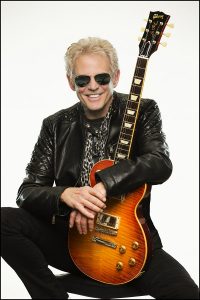 The album features some of the biggest names in music including Sammy Hagar (vocals on “Rock You”), Slash (a wicked guitar solo on the title track), Richie Sambora and Orianthi (dual guitar soloists on “Limelight”), Peter Frampton (Telecaster-blasting and background vocals on “The Way Things Have to Be”), Joe Satriani (a blistering, lightning-fast solo on “Rock You”), Mick Fleetwood and Chad Smith (trading off drumming duties on the title track), Bob Weir (background vocals on “Rock You”), David Paich (keyboards on “Hearts on Fire,” piano on “The Way Things Have to Be”), Steve Porcaro (keyboards on “Falling in Love”), Alex Lifeson (acoustic and electric guitar accents on “Charmed”), and many, many more.

The album was mixed by Bob Clearmountain and mastered by Bernie Grundman.

Felder and his iconic double neck Gibson electric guitar, that he recorded and performed with on Hotel California, are currently being featured at the Metropolitan Museum of Art’s new exhibit titled Play It Loud: Instruments of Rock and Roll 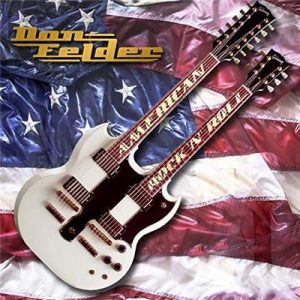 TRACKLISTING:
1. American Rock N’ Roll
2. Charmed
3. Falling In Love
4. Hearts On Fire
5. Limelight
6. Little Latin Lover
7. Rock You
8. She Just Doesn’t Get It
9. Sun
10. The Way Things Have To Be
11. You’re My World
ABOUT DON FELDER
World renowned musician Don Felder was one of the five members and a former lead guitarist of the rock group the Eagles for 27 years. He wrote the music for their biggest hit, the multi Grammy award winning song “Hotel California”. With 14 Grammy nominations and 4 wins, his signature guitar work has become legendary. Don and the Eagles also hold the honor of having the first Platinum album certified by the RIAA. That album, The Eagles’ Their Greatest Hits 1971- 1975, has reached over 29 million copies, becoming the best-selling album of the 20th century.