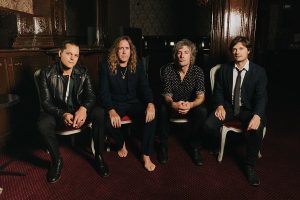 In celebration of Abbey Road’s 50th anniversary, some of Australia’s most respected musicians and members of iconic groups, collectively known as ARC — Kram (SPIDERBAIT), Mark Wilson (JET), Davey Lane (YOU AM I) and Darren Middleton (POWDERFINGER) — all self-confessed Beatles tragics, will faithfully and lovingly bring The Beatles’ most audacious creation to life on stage, performing Abbey Road in full, from start to finish, followed by a second set comprising of a selection of hits spanning the breadth of The Beatles’ career and catalogue.

Abbey Road – The Beatles’ swansong and their crowning achievement as a recording group – is a stately, majestic, playful yet fiercely rocking masterpiece of pop music, regarded as one of the greatest records of all time.

Tickets for all shows will go on sale at 10am (local time) this Monday, March 18.

My Live Nation members can be among the first to secure tickets during the pre-sale beginning at 10am tomorrow, March 15.

For complete tour, ticketing and VIP Experiences information – including the Ultimate VIP Meet n Greet Experience which offers exclusive access to a Q&A session and an acoustic performance – visit: livenation.com.au.

Abbey Road is the eleventh studio album by English rock band The Beatles, released on 26 September 1969 by Apple Records. It was an immediate commercial success reaching #1 in the UK and US. Over time, the album became viewed as among The Beatles’ best and many critics have ranked it as one of the greatest albums of all time.

Abbey Road spent 81 weeks on the UK albums chart, 12 weeks at #1 on the Billboard chart and was certified 12-times platinum by the RIAA in 2001, selling in excess of 31 million copies.

The album’s iconic cover, which features the four band members walking across a zebra crossing outside Abbey Road Studios, has become one of the most famous and imitated images in the history of popular music.

“As far as rock music swan songs go, this might be the best there’s ever been.” – Billboard

TICKETS ON SALE 10AM MONDAY MARCH 18

Darren Middleton (POWDERFINGER), Mark Wilson (JET), Davey Lane (YOU AM I) and Kram (SPIDERBAIT) have joined forces to become ARC, one of the most collectively celebrated and successful supergroups in Australia’s rock history with 33 ARIA Awards and 16 Top Ten ARIA albums combined.

Kram – Drummer and vocalist for Spiderbait, one of Australia’s most successful and respected alternative rock bands, and Australian rock supergroup, The Wrights.

Darren Middleton – Guitarist and songwriter for one of the most successful Australian rock bands of the past two decades, Powderfinger, and now successful solo artist.

Davey Lane – Guitarist for definitive Australian rock band You Am I, The Pictures and rock supergroup The Wrights.