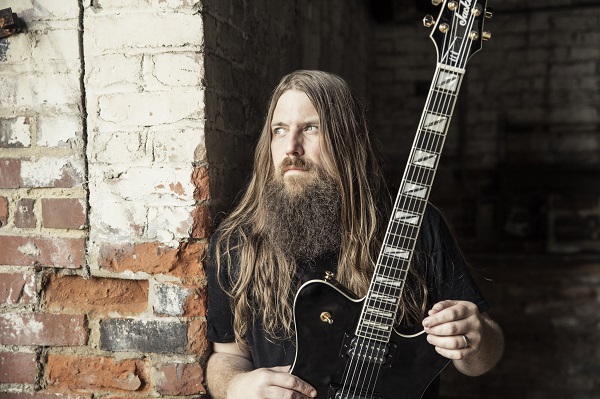 “For the most part I wasn’t chasing people around in fact honestly I was flattered and kind of humbled at the same time to find in most instances the people I reached out to were willing to listen and once they listened they wanted to be a part of it.”

From Release: Mark Morton, the prolific guitarist of Lamb of God, has announced a new project that sees him further explore his creative drive for writing and collaboration. The album was made alongside a dream team of highly respected musicians from a multitude of musical worlds; some friends, and some who would never be expected to collaborate with metal genre leaders Lamb of God.

While at home Mark gave us a call to talk about his new project and album ‘Anesthetic’, its creation, its guests, the future, and much more…

For starters, it’s been about five and half years since we last chatted, so let’s catch up, how have the last five and a half years been for you? Ha ha
*laughs* Pretty good, been around the world three or four times, had a couple of albums I think… *laughs*

We’re here because ‘Anesthetic’ is coming! How did this project and idea come about?
Well it came about really just kind of having songs that I’d been working on for some time that didn’t fit into the frame or the lane of Lamb of God and what we do as a band. I’m kind of always writing, not every day but when I pick up a guitar I’ll have an idea for a chord progression or a riff or a song idea and I’ll document that in some way and star working it and a lot of times the songs just wind up being rock songs or like I said something that doesn’t suit Lamb of God. Sometimes I send those songs to other people to use or use parts of to develop and these were kind of just laying around, not laying around like they were garbage but just kind of sticking around and I was working on them and I played several of them for Josh Wilbur my long-time producer and he agreed they were worth developing. So it kind of started there we just started really doing pre-production on these songs not knowing exactly where they were gonna go, and then Jake Oni got involved on the business side and then later a little bit on the creative side as well and we just developed the idea for the ‘Anesthetic’ project and it kind of became a destination for this material.

Were these songs written with certain vocalists in mind or did that come once it was written and suited for someone?
It actually came later, the songs almost all of them were written instrumentally first and then Josh and I would sit back and listen and imagine who best would sing the song. Some of them I had written lyrics and vocal lines for, some of them we might have had a chorus for but not the verse, some of them were just blank canvases of instrumental music but whatever sort of state of existence they were in we would listen and just try to get a vibe for who we would hear singing the songs. For the most part the early conversations we had about vocalists are the people we wound up getting.

Was there someone you really wanted to work with but just couldn’t make it work?
Well there’s lots of people I’d love to work with but no, I mean not really early on for one of the metal songs I had the idea of trying to see if Jason Newsted would play bass on one of the tunes and his schedule wouldn’t allow it but we did correspond about it and he very respectfully and politely declined. For the most part I wasn’t chasing people around in fact honestly I was flattered and kind of humbled at the same time to find in most instances the people I reached out to were willing to listen and once they listened they wanted to be a part of it.

It’s haunting hearing Chester’s performance thank you for letting us hear him belt it out one last time. Can you tell us what it was like working with him to get that song done, it’s so good?
Well thanks, it was a really great experience working with Chester he was super motivated, super excited, very energised about the song he loved the song he was very prepared, that song was written musically and we had demoed a chorus for it and the chorus was pretty much in good shape for that but the verses and the bridge were not really written yet. So Chester came in with a lot of ideas and we really kind of locked in and started working on the song together and had a real cool creative dynamic right from the start and so even now when I hear the song now it was a real positive experience doing that song. Some of the subject matter of the song is pretty heavy but in terms of the process of writing it and trying different ideas and time in the studio recording it and being able to work with him in that proximity it was just a really great experience.

Besides that one, the one that stood out for me was ‘Axis’ with Mark Lanegan, just had a real different vibe to it, can you tell us a little about that one and how it came together?
Well that came together just out of me being a huge Mark Lanegan fan and he’s one of my favourite singers in music and I was I guess just trying to see if *laughs* I mean I just took a shot, I didn’t know Mark I was just a fan of his work so I took a shot and figured if I could get in touch with him and see if he’d listen to a song idea I had and if he’d be interested in working on it, not really expecting to get a yes back but he did he said he’s listen to it and when I sent him the original version of the song he said he would do it. So he wrote his lyrics and vocal part to actually a different version of that song and when I got his vocal, when the completed vocals came back I had a totally different idea for the song direction. So what I did was I had Josh pull all the music that we had done and he had laid his vocal to and just gave me Mark Lanegan’s vocal to a click track and I rewrote the whole song kind of to his vocal and that’s the version you hear on the album.

I know it’s not even out yet but are you already ticking over of what you can do next or who you can work with or is this a one time thing?
Neither… I’m not really tripping over myself to start another solo album *laughs* because this one’s not our yet but I wouldn’t rule out doing it again it was a really positive experience for me, I really enjoyed the process and just enjoyed the experience. The project itself, the album is really special to me and I’m really proud of it and I’m thrilled that people are responding positively to it too because I really didn’t know what to expect. I didn’t know how people would react to me doing something on my own outside Lamb of God, I didn’t know how they’d react to the fact that it isn’t particularly a metal record, so the response and the feedback I’ve been getting is great. Who knows about the future, maybe we’ll do it again sometime but for now, March 1st this one is coming out.

Was this a more challenging album to make as it was yours rather than being a part of Lamb of God making a record?
Hmm… in some ways it was more challenging because it was definitely a different experience, so with lamb of God I contribute a lot creatively but we are a collective, you know it’s five people with five opinions and it’s kind of a democracy and everyone vote sand sometimes things ate three to two, sometimes it’s all five, sometimes it’s four to one but we vote on everything and everything has to feel right. Sometimes it’s a pain in the ass, especially when you’re outvoted and you really believe in something but this time I had a little less of that sort of I guess oversight on me, I guess restraint on me so I was kind of allowed to do whatever I wanted to and that can be overwhelming at times *laughs* so it’s a different kind of focus, it’s a different process but it was a huge learning experience for me. I thought I knew a lot about making albums, turns out I knew a lot about making albums as a member of a band and I had a lot to learn about making albums as sort of the I guess creative director but I learned as I went and I’m pretty proud with how it turned out.

Over time it’s easy to say what’s changed but what would you say is the one thing that’s stayed the same about the way you make music?
Oh what a great question… I hope this doesn’t sound too full of myself but I think I would say the honesty with which I play music, I really do just kind of play what I want to hear and kind of what I’m into at the moment. It’s not so much that I’m never really chasing something it’s more kind of spitting out what’s rattling around between my ears. So I think with my music or music that I’m at least involved in contributing to I feel like I’m pretty honest as a songwriter and as a player, it’s pretty genuine whether you like it or not I think it’s real.

Sneaky Lamb of God question, anything coming up you can give us the gossip on?
Oh well we’re working on new material, I can tell you that proudly. So we don’t really have a release date or anything like that I can talk about because we’re still writing but there’s a whole lot of new material, a whole lot of new song ideas bouncing around, it’s really exciting and feels really good.

Lastly let’s look ahead to the future, finish this sentence for me, in 2019 Mark Morton will…
Be touring a lot *laughs* it’s like looking at a big mountain you’re about to walk over. It’s exciting but it’s a big deal.