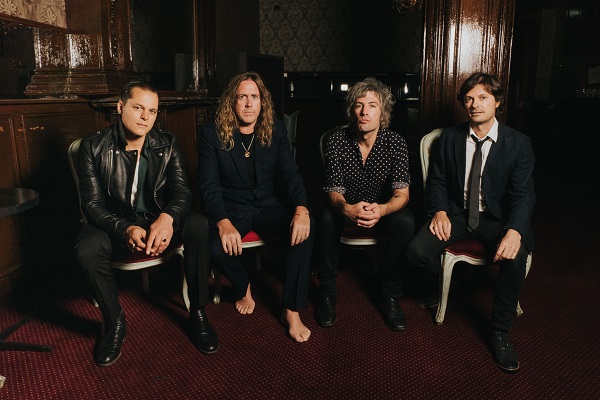 “It’s funny, a lot of the times with these sorts of supergroups, they’re good on paper but they might not necessarily work on stage as well as you would hope, but this one has got a really special energy to it. So it was a nice accident that came together and here we are.”

From Release: In celebration of Abbey Road’s 50th anniversary, some of Australia’s most respected musicians and members of iconic groups, collectively known as ARC — Kram (SPIDERBAIT), Mark Wilson (JET), Davey Lane (YOU AM I) and Darren Middleton (POWDERFINGER) — all self-confessed Beatles tragics, will faithfully and lovingly bring The Beatles’ most audacious creation to life on stage, performing Abbey Road in full, from start to finish, followed by a second set comprising of a selection of hits spanning the breadth of The Beatles’ career and catalogue.

While at home in Byron Bay, Kram gave us a call to talk about the very special 50th anniversary of The Beatles’ Abbey Road and the performances with the super group ARC, as well as his take on The Beatles, what’s happening with Spiderbait, photo opportunities across Australia, and more…

For starters, it’s been just over five years since we last chatted so let’s catch up, how have the last five years been for you?
The last five years for me and for us like Spiderbait in general has been an incredible time really. Pretty much from when we played Splendour maybe four years ago we had this incredible show on the main stage that was a real trip for us and we’ve done a few tours since then and a lot of different tours around the country. I’ve been working with a bunch of different people as well as doing new material with Spiderbait and now we’re doing this amazing Abbey Road show so yeah the last five years have been fuckin’ awesome, man.

We’re here because later this year we’ll all be celebrating the 50th anniversary of ‘Abbey Road’ but you and some amazing mates forming ARC, how did this all come together?
So, the band sort of was created sort of haphazardly in a way by Darren asking us, myself, Davey and Mark whether we wanted to put a band together to play at the World Cup in Brazil a few years and we didn’t have a lot of time to make a decision and were like oh fuck yeah OK cool, great, so we put it together and we did a couple of shows over there as part of the Australian football teams thing and it was just amazing, we really jelled as a band, we’re very old friends all four of us obviously from playing with each other’s bands at different shows over the years and it just really jelled. It’s funny, a lot of the times with these sorts of super groups, they’re good on paper but they might not necessarily work on stage as well as you would hope, but this one has got a really special energy to it. So it was a nice accident that came together and here we are.

Besides celebrating fifty years, what is it about Abbey Road that you feel warrants this kind of event?
Well, as I’ve said a few times before, this is the greatest bands in history final work and also the biggest band in history and also the first band to be huge and sort of created the modern rock and roll phenomena as we know it today. Also from the perspective of they had made the decision to break up and decided to make one last record, so this is sort of like a creative farewell to the world and each other, and it’s not very often bands get to do that let alone create such a masterpiece. So in a lot of ways it’s a whole bunch of different energies coming together to create this incredible work so I think it definitely deserves celebration.

Not only will you be playing it start to finish but also celebrating the band’s career with some other tunes, but how do you even pick songs from such a vast catalogue of amazingness?
It’s tricky so the structure of the show, the idea is basically to do the album from start to finish and then after that we thought I sort of had this idea of where do you go once you’ve reached the end and the obvious answer is you work your way back to the start. So the idea will be to go back through the band’s career and end up at the first single where it all started for them and for me personally it’s a very interesting idea to think about within regards to even your own band, I’ve been in my own band for many years with the same line-up and we’ve been through a lot together and it’s really interesting to go back to where you started and I guess see what that journey has done to you a as person you know and nobody had a bigger journey than The Beatles. So we’ll just pick what we think is a good bunch of songs that we feel we can do justice to but I think what they’ll be is yet to be determined but I’m sure it’ll be a good mixture.

Can we expect to see you all recreating the cover across numerous cross walks in Australia?
*laughs* That’s the first time anyone’s asked me that this week that’s a great idea! I don’t know I mean hopefully, that’s a really good idea, if we do do that I’m definitely going to give you a big plug. That’s a fuckin’ awesome idea *laughs*

So on The Beatles, for you what was the most stand out thing they did for music?
I’d have to say two things, one is the songs I just think that song catalogue, I’ve been doing a lot of thinking about like I saw the Queen movie and my kids love it and I love Queen and they’re one of the greatest bands of all time, and then you look at yourself and your own band and the songs that you write and if you look at the top ten Beatles songs, they’d probably be comparable to the top ten Queen songs, then if you look at the top twenty Beatles songs, top thirty Beatles songs, top forty, once you start getting into the bigger numbers there’s no other band that’s had such consistency and strong work. It’s just mind boggling, this is why they’re so studied, the only other songwriter in history who is studied as much as them is Franz Schubert who is probably the only person that wrote more songs than The Beatles did. So song wise is the inspiration for any person that loves songs but in a way even more importantly I love the way they created a space where for the first time a collective, a group of people, a group of friends could do something bigger and more powerful in a way and more successful than the individual because before The Beatles there were no bands it was just individuals, it was Buddy Holly, it was Elvis Presley, it was Frank Sinatra and suddenly this group of friends they basically invented pop music in that way where it’s the group that’s the power rather than the individual. I love Elvis and I love solo artists as well but as a person that always wanted to start a band I think they’re a great inspiration. So they invented so many things and that’s kind of why they are the biggest but it’s very, very rare in culture that the biggest is also the best and is also the first.

Outside of this amazing event, anything you can fill us in on musically in your world?
Oh there’s heaps. In between all of this Beatles stuff I’m putting together a new Spiderbait record, we’re gonna do a new album and we’re really excited about that because our last as you asked earlier our last few years of shows have just been monumental and I mean we just finished another big tour with Magic Dirt and Jebediah in Perth and I think the time is right for us to do some new work we’re really excited by that. Also I’m in this band with James Morrison and Paul Grabowsky called The Others, and we’ve been playing, we played Perth festival and gonna play Adelaide festival this year and looking to do a record as well. So that’s kind of a totally different kettle of fish, it’s a totally trip band but yeah I’m sort of packing as much in as I can in at the moment for some reason maybe I think I should relax more *laughs*.

Lastly let’s look ahead to the future, finish this sentence for me, in 2019 Kram will…
Probably be touring a lot with Spiderbait with this new record I would imagine. That’s the plan anyway and going to the beach as much as possible *laughs*. I think there’s also of more ARC productions as well, if this Abbey Road one does well and we’re happy we’d definitely like to do more things in the future so it is a really good band I just need to fit all of it into the calendar.

Tickets On Sale 10am Monday March 18
Live Nation Pre-Sale: 10am March 15 until 8am March 18
Details at livenation.com.au