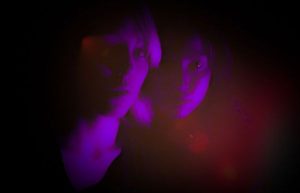 Pulsating rhythm and production meet strong vocal melodies; a stirring debut single, ‘Stormy Weather’ is the perfect introduction to exciting new duo, FORCES & FURY. As the new project of Astrid Holz and Kat Ayala of Rackett fame, Forces & Fury is the culmination of a shared desire to explore the textured sonic soundscape of alternative electronica and rock music.

The duo’s talent and musicianship has been proven through years of touring and shaking up of live venues around the country with Rackett, a band that has prided itself of producing unabashed raw music with weight behind it. Multiple sold out shows, impressive performances alongside massive acts including The Darkness, as well as praise across music publications and national community radio alike has provided Kat and Astrid with even more determination and vigour when it comes to the formation of their new collaborative project.

Featuring Rackett frontwoman Rebecca Callander on guest vocals, ‘Stormy Weather’ builds in intrigue; buoyed on by layered electric guitar and crisp vocals, the darkness simmering beneath the surface of this music bursts through with each chorus, demonstrating the musicians’ deft playing with sonic tone.

The origins of ‘Stormy Weather’ stretch back to 2015, born out of sessions in the Philippines, before being brought back to Australia to continue being finessed and perfected into the final product we hear today. For Forces & Fury, getting and maintaining the perfect balance of lyricism, instrumentation and production was key. “Even when ‘Stormy Weather’ was finished in early 2016, we still took a long time to finesse the finer details of the track and find the perfect vocalist to deliver the story. We couldn’t be happier with the vocal performance Rebecca Callander delivered once we got her into our Marrickville studio in 2018.” Forces & Fury

Kat and Astrid’s foray into a slightly different lane with Forces & Fury still encapsulates this energetic and wickedly intelligent approach to songwriting and production, but with a new creative door unlocked. Bringing a wealth of technical experience into the fold, Kat and Astrid (both unashamed gearheads) have been able to forge their own sound exactly to their own specific ear and inclinations. Astrid, a sound engineer by trade, has been incorporating production in with drumming professionally throughout her entire career, while Kat’s talent as a multi-faceted guitarist has seen her earn endorsements by Vox Amplification and Strandberg Guitars.

Further exploring the themes of an already provocative and image-heavy single, Forces & Fury linked up with Erin and Justin Latimer to bring their ideas to life in a visual capacity. The official music video for ‘Stormy Weather’ may have been conceptualised out of a rather simplistic idea, yet the end result is something much more nuanced and captivating. “As ‘Stormy Weather’ contains imagery of rough oceans and incessant rain, we saw it only fitting to use water as the main feature in the video. We had a simple idea that Erin and Justin brought to life in a beautiful and engaging way. We wanted the music video to stand as its own piece of art, not just the accompanying vision for our track. We’re incredibly proud of the result.” Forces & Fury

Forces & Fury, while in their infancy as a group, have been growing and meticulously working on their creative output, with more new music on the way. Both Kat and Astrid are bringing to the table shared musical influences and their own proud senses of individuality, the fusion of which stands to introduce some exciting new music to the Australian scene.

‘Stormy Weather’ is just the beginning of a journey, ready to be navigated.