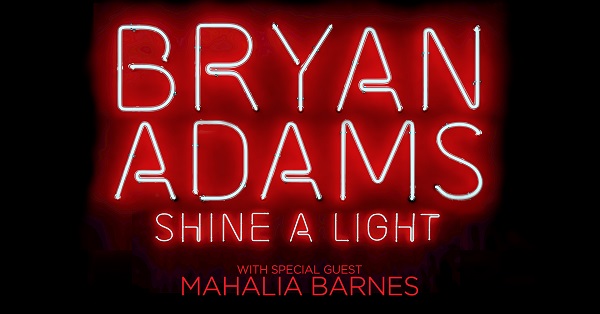 Bryan Adams is back in Sydney, this time in the Autumn of 19. Doesn’t really have the same ring to it, but here in support of his newest album ‘Shine A Light’ I’m looking forward to seeing what he comes up with tonight.

Mahalia Barnes opens the show tonight and her funky / soulful voice is off the charts along with her band The Soulmates that includes two keyboards are the perfect backing. Taking us through her set of originals and a cover or two thrown in for good measure she shows us what she’s capable of and what that is, is power. Have to give a special mention to the keyboard player with the whammy bar, he was on fire!!! Alright! Here’s Jimmy Barnes come out to sing ‘River Deep Mountain High’ with his daughter and as expected he does what he does so well and stays out for one more which turns out to be ‘Proud Mary’ and this slower version to start before Jimmy Barnes has a tambourine. I repeat Jimmy Barnes has a tambourine and this was an awesome way to close the set. The did a great job and are a killer outfit. Jimmy respectfully put his microphone down and left the stage allowing Mahalia and The Soulmates to have their well-deserved moment.

While the audience is mesmerized with the backdrop of Bryan before the set begins the lights finally drop and with a “1 2 3 4” Bryan and band kick straight into ‘Ultimate Love’ and they set the pace for the night. As he lets his guitar ring out the opening riff from one of his biggest songs rings in as right now we ‘Can’t Stop This Thing We Started’ and what a tune. Still. The video backdrop made it hard to watch him live but was mesmerizing. The crowd joins in and are now warmed up but that goes next level as he puts on the Stratocaster and rings in that all too familiar opening to ‘Run To You’ and for a song over thirty five years old it truly stands up. Turning on the lights to check out the venue, a thankful and happy to be back in Sydney Bryan Adams talks about being in Christchurch and dedicated next song ‘Shine A Light’ to New Zealand. All of a sudden the place is lit up with phones and lights being shone. That looks pretty cool I have to say.

Wasting no time and back into the hits as the crowd takes the first verse of ‘Heaven’ and that was so good. Hearing this song live is just something else, the power of this ballad is where it’s at. What a perfectly structured song. Songs like this are testament as to why he’s still around. ‘Go Down Rockin’ picks the pace back up and gets the crowd woo hooing. We go back to 1984 with ‘It’s Only Love’ featuring some outstanding shredding from guitarist Keith Scott. ‘Please Stay’ slows things down again but that only lasted one song as ‘Cloud Number 9’ brings the tempo back up and sees the smoke machine working overtime along with legendary drummer Mickey Curry. Damn that’s a good song. ‘You belong to me’ gets everyone up and dancing and the person behind me shaking the hell out of my seat. Oh whoa. This is early! Time to hear a song about a certain summer. The place goes wild when ‘Summer of ‘69’ starts and they lap up every second of it. Damn I love that song as did every person in the room tonight, the visuals of a body with the lyrics written on it was hard to not watch and hearing that song belted out at full volume is something else. I miss the 80’s.

‘Here I Am’ sees only Bryan and keyboard player Gary Breit remain on stage for a beautiful rendition of an amazing song. Even what he’s doing on the acoustic now has the place cheering, the man can do no wrong tonight. Gary leaves and Bryan remains on stage with an acoustic to sing ‘when You’re Gone’ without Mel C, and after that the band return only to have the piano start ‘(Everything I Do) I Do It For You’ and we’re back to mega ballad land and I’m in heaven (place not song) and damn, that voice. He’s got it even more than he had it before. Hang on best bit coming up. Winner. Keeping the set perfect ‘Back To You’ is just one of those perfect live songs, not to mention with some awesome slide guitar work. ‘Somebody Like You’ is another ripper from the catalogue and catchy as all get up and again in the breakdown let’s Mickey Curry shine.

‘I’ll Always Be Right There’ after a couple of false starts and updated lyrics which now include “fucking hell” for the win. Bryan and Keith are front stage and this acoustic number is unexpected and awesome. The nice moment just got completely trampled as ‘The Only Thing That Looks Good On Me Is You’ explodes! Some excellent cowbell work and this tight band smash it out of the park. “This one’s called Cuts Like a Knife” and yeah it is! Loving going deep into the catalogue for the big guns. Again, a song that still stands up to this day and could be a bit of it came out today, not to mention the awesome use of the nah nahs and the extended outro was perfect. Straight into ’18 til I Die’ which has the place still rockin’ and clapping along.

Calling for requests and playing snippets of ‘Into The Fire’ followed by ‘Thought I’d Died And Gone To Heaven’ and ‘There Will Never Be Another Tonight’ but as the band return to the stage ‘Please Forgive Me’ got the biggest cheer and sing along and as the full band came in to give this ballad the power it deserves. ‘Band New Day’ goes full band again and gets things full rock show again and they say their goodbyes with an impressive piece of choreography.

The band return to the stage with a woo hoo yeah yeah ‘I Could Get Used To This’ with its big chunky riff was short and sharp but was a nice encore choice as was a cover of ‘I Fought The Law’. Bryan and band are then joined on stage by Jimmy Barnes and Tash Wolf on guitar they play ‘High Voltage’ by AC/DC!! That was something you don’t get to see every day!  Now we all know Jimmy can sing but holy moley, Tash Wolf, shredder!

Staying on stage with an acoustic to play a solo version of ‘whisky in the jar’ with some nice harmonica work, hearing his vocals on this song bellow through the ICC was amazing. Closing with the big ballad ‘All for one’ the place is lit up like a Christmas tree in here. Bryan takes a well-deserved standing ovation and bow before exiting the stage after playing a set that took us through his established catalogue.

Bryan Adams you are welcome back in Australia any time as like a fine wine the man keeps getting better with age. A fun, entertaining night had by all.

Set List:
Ultimate Love
Can’t Stop This Thing We Started
Run To You
Shine A Light
Heaven
Go Down Rockin’
It’s Only Love
Please Stay
Cloud Number 9
You Belong To Me
Summer of ‘69
Here I am
When You’re Gone
Everything I Do
Back To You
Somebody Like You
I’ll Always Be Right There
The Only Thing That Looks Good On Me Is You
Cuts Like A Knife
18 Till I Die
Into The Fire
Thought I’d Died And Gone To Heaven
There Will Never Be Another Tonight
Please Forgive Me
Brand New Day
I Could Get Used To This
I Fought The Law
High Voltage
Whisky In The Jar
All For One