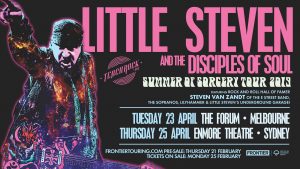 ‘The best bands, like this one, know they have a job to do … Van Zandt’s lifetime love affair with rock n’ roll, in all its myriad forms, shines through in every note played and sung tonight. A great show.’ – Hot Press

‘A rousing, blow-the-roof-off-the-sucka, 15-member ensemble that has to be seen and heard to be believed…’ – www.rgmagazine.com

After creating the “Jersey Shore” sound with the Asbury Jukes, Little Steven became a founding member of Bruce Springsteen’s E Street Band, as well as co-producing two of Springsteen’s most beloved albums, Born In The U.S.A and The River.

He went on to become a successful solo artist in his own right, recording and performing with his band Little Steven and the Disciples of Soul. In 2017 he released his first new album in over 15 years, entitled Soulfire, returning to his Rhythm and Blues roots, withRolling Stone USA declaring it one of their “Best Albums of 2017”. Check out the tour’s companion live album, Soulfire LIVE!.

Radio lovers also know him as the artist behind “Underground Garage” (‘Mind-blowingly great… the most exciting thing to happen to rock radio in years” – Rolling Stone), his internationally syndicated show launched in 2001 and the USA’s most successful syndicated Rock radio show in the past 40 years. Then there’s Wicked Cool Records, the record label Van Zandt started to further support new Rock and Roll bands.

As an actor Van Zandt made his acting debut in the legendary, award-winning TV Mafia-drama “The Sopranos” playing ‘Silvio Dante’ (a role he created). He would go on to star in, co-write, executive produce, provide the music supervision, score, and direct (the final episode) of “Lilyhammer”, which was the FIRST original programming for Netflix.

Skip to 2019, and just last month Van Zandt was out on the picket line in Los Angeles with striking teachers, after recently launching TeachRock, an education program which uses the history of music as a way to engage students, providing resources available to educators at NO COST. Ten years in the making and with a board including Van Zandt, Springsteen, Jackson Browne, Martin Scorsese and Bono, it’s been a smashing success.

Last year Little Steven and the Disciples of Tour went back on the road with their landmark live “Soulfire Teacher Solidarity Tour.” It marked the first-ever Rock tour specifically geared towards addressing the crucial societal need of helping educators and saw over 18,000 teachers (and counting) register to use the TeachRock Music History Curriculum. At each stop of the tour, The Rock and Roll Forever Foundation hosted  FREE TeachRock Professional Development Workshops, with educators and a guest who attended also received a FREE ticket to that evening’s concert.

A limited number of tickets have also been put aside for educators to attend the Melbourne and Sydney shows for FREE. Visit TeachRock.org to sign up and for more info.

“Music will forever be humanity’s most effective and consistent source of inspiration and motivation,” says Stevie Van Zandt of his mission, “and, we have learned, music turns out to be our most solid common ground for establishing communication between teachers and students which is where education begins.”
Live on stage, Little Steven and the Disciples Of Soul are a true force to be reckoned with! This will be a night of MAXIMUM ROCK AND SOUL like no other – grab your tickets immediately, don’t miss out!
LITTLE STEVEN AND THE DISCIPLES OF SOUL
MELBOURNE & SYDNEY
APRIL 2019
Presented by Frontier Touring
Tuesday 23 April
Forum Melbourne | Melbourne, VIC
18+
ticketmaster.com.au | Ph: 136 100Thursday 25 April
Enmore Theatre | Sydney, NSW
Licensed All Ages
ticketek.com.au | Ph: 132 849
FRONTIER MEMBERS PRE-SALE
via frontiertouring.com/littlesteven
Runs 24 hours from: Thursday 21 February (1pm AEDT)
or until pre-sale allocation exhausted
GENERAL PUBLIC ON SALE
Begins: Monday 25 February (1pm AEDT)
Share this post on: Share on FacebookShare on Twitter