A special vinyl pressing is available for pre-order today as a single-sided 7″ vinyl with a laser-etched b-side. A limited edition glow-in-the-dark variant will be randomly inserted throughout the entire pressing of black vinyl stock. Along with the 7″, AOF will have new “Familiar Drugs” inspired merchandise on their official storefront HERE.

Says George Pettit about the new track, “‘Familiar Drugs’ is about recognizing you need to make a change in your life, being presented with the opportunity to make that change, and then choosing to do the same thing you always do. It’s about something very specific to me but it can be taken literally or interpreted in any number of ways. Most people have something in their lives they can’t quit: substances, unhealthy relationships, lethargy, self righteousness, a job they hate. ‘Familiar Drugs’ is about choosing comfort over self betterment.”

Fans can tune in to the band’s Facebook page today for a special live stream performance from the House of Strombo in Toronto. AOF will perform “Familiar Drugs” for the first time, plus selections from their award-winning catalogue. 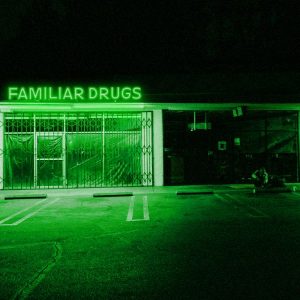 Alexisonfire’s sold-out 10th Year Anniversary Farewell tour in December 2012 touched down on four continents in 24 days, illustrating how meaningful the band still is to their legion of fans around the world. They have today announced select international headline shows this June, kicking off in London (UK), with stops in New York, Los Angeles, and wrapping up in Toronto.

“With songs that balance singing, screaming, frenetic pacing, and monster dynamics, Alexisonfire have earned their place among screamo’s elite.” – Revolver

“The band’s on-stage chemistry was undeniable, making their single hour stay seem all too short.” – Exclaim!

“The step up to end all step ups.” – Rocksound

“Alexisonfire are still one of the best live hardcore bands anywhere in the world.” – Beat Magazine