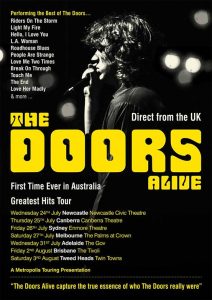 The Worlds #1 Tribute to The Doors

Hailing from Britain, THE DOORS ALIVE are more than just a tribute act. Renowned and respected the world over, the band re-create the sound, look, presence and magic of THE DOORSconcert experience. Fans of THE DOORS are transported a nostalgic musical journey with all the Classic Hits – Light My Fire, Break on Through (to the Other Side), Riders On The Storm, People Are Strange, L.A. Woman, The End, Roadhouse Blues, Love Her Madly plus loads more

With the surreal ability to capture the iconic look, attitude and distinct baritone voice of mystical figurehead Jim Morrison, the band showcases the musical chops of the original band members with ease and finesse. Taking the audience on a nostalgic musical journey, THE DOORS ALIVE use the very same instruments that members of the original band played

Earning five-star reviews as well as the highest praise Doug Cameron (The Doors Assistant Road Manager 1968/69) “The best Doors tribute band that I’ve seen…. Sometimes they sound more like The Doors than The Doors”. THE DOORS ALIVE re-creating all your favourite classic DOORS using the very same instruments that members of the original band played leaving crowds the world over awestruck by show… “a very metaphysical experience” was how a fan described it

‘’The Doors Alive is the closest thing you will get to being in the same room as the real thing. Close your eyes and you will be transported back to the sounds that made the Doors one of the most iconic and revered bands’’(Academy Music Group)

Special music lasts forever and is not just a product of its time. Promising to be a celebration of remarkable proportions, don’t miss THE DOORS ALIVE as they re-capture the greatness of THE DOORS and bring their amazing songbook to life in Australia for the first time ever!