Eat Till You Pop… Shop Till You Drop! Here Are The Food & Market Stalls Joining Download 2019! 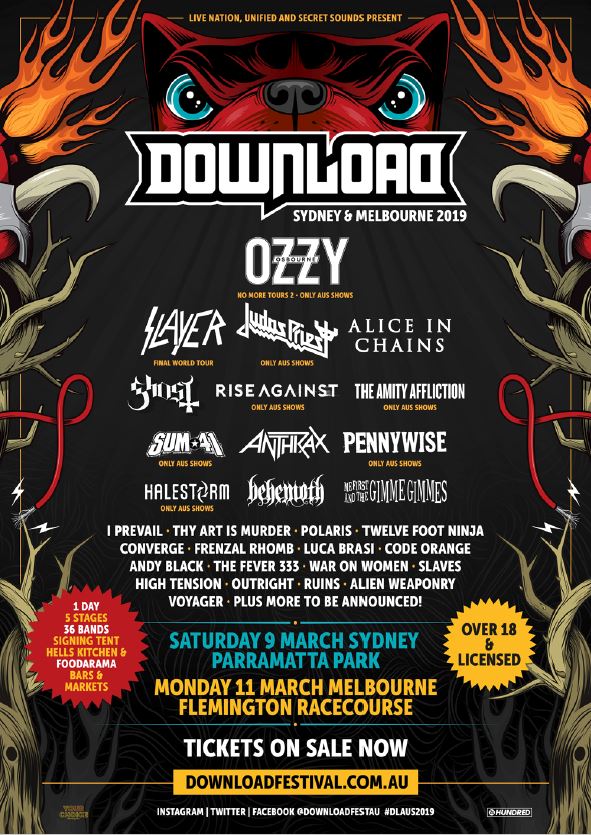 Here at Download we put as much effort into catering for your actual taste buds as we do for your musical taste buds… we want your mouths to be chomping and your bellies to be popping… and when we are serving up a line-up that features the likes of Ozzy Osbourne, and two of the Big Four, not just any foodstuff will do!

It is our pleasure to announce the return of legendary purveyors of all things yum and the men behind everyone’s favourite burgers, Mary’s, Jake and Kenny are returning in 2019 to gastronomically curate your eats! They invaded Download Melbourne last year, capturing the hearts and stomachs of Melbourneites and are back serving a bigger and more delicious line up, that features a handful of Sydney and Melbourne’s most talked about and talented chefs. There’s a little bit of something for everyone from the high-end foodie to those who love everyday gozleme….

After a massive debut year in 2018, Hell’s Kitchen returns to Download with a mouth-watering line up once again lovingly curated by Mary’s legends, Jake and Kenny.

Marys ‘s opened in a former STD clinic on a small back street in Newtown in 2013, quickly gaining a reputation as one of Sydney’s hottest joints. With the red light hanging out front, the lines formed, and have barely moved since.Short menu, loud music and plenty of booze is the recipe from which the Mary’s juggernaut continues to grow. Mary’s has long been associated with good music, and this year Jake Smyth and Kenny Graham bring their brand of rock n roll food to Download Festival 2019. The pair have also opened a City Mary’s, two pubs – The Lansdowne Hotel Chippendale and The Unicorn Hotel Paddington – and P&V Liquor + Wine Merchants Enmore.

As co-head chef alongside her partner Matt Stone at Oakridge in the Yarra Valley, she’s turning out some of the most talked about food in the country, particularly her talent for pastry and baking bread. She shares her inspiring sustainability ethos and the price of striving for perfection  and reveals the incredible inner city food hub you never knew existed. Oakridge has been awarded one Chef’s Hat in The Good Food Guide 2018 Awards. Oakridge was named No. 50 in Gourmet Travellers Top 100.

For those of you who are a little easier to please, we have rock solid regulars returning to Raf’s Foodworld featuring Beatbox Kitchen, Taco Truck, HSP, Juanita Peaches, and All Day Donuts.

Your culinary curators will of course be appearing in their hometown too! Jake and Kenny will also be serving their delectable burgers to all of you lucky RIP ticket holders!

Paul is from Barbados where his first professional kitchen experiences were at Sandy Lane Hotel.

At just 25, Executive Chef Ali has put the restaurant at the forefront of the food scene in Tasmania creating dishes that the customers love all the while making a name for herself. In 2018 the Agrarian Kitchen won the Good Food Guide’s ‘Regional Restaurant of the Year’ and she claimed the Best New Talent at the Gourmet Traveller Restaurant Award. Ali Currey also won 2019 Gourmet Traveller Best New Talent.

Run by the same brothers as Fratelli Paradiso in Potts Point, 10 William St mixes classic Italian swagger with Australian-style experimentation. Internationally recognised Enrico Tomelleri who moved to Australia in 2011 before landing his first local stint at Fratelli Paradiso. Fratelli Paradiso was Ranked 25th in the prestigious Australia’s Top 100 Restaurants Award in 2016 and earning one hat in the Good Food Guide. In 2018 was ranked No.96 in Gourmet Traveller Top 100.

There is nothing like a good shop to aid digestion after a heavy meal, you got some leftover Christmas cash burning a hole in your pocket… we got you covered with the Download markets.

The folks from 24 Hundred will cover all your band merch needs, figurine and paraphernalia lovers can indulge at Popculcha, while the vinyl geeks expand their collections at Rare Records. We know you all care about our wildlife as much as you do about your music makers, the good folk from Sea Sheppard will be on site to educate and spread the word.

Melbourne patrons get legendary USA street wear company, Sullen Clothing and Black Flys, for all your eye wear needs. Everyone’s favourite music store Utopia will service your mad fan needs in Sydney, there are loads more eats and stalls to be announced in the coming weeks so keep your eyes and ears peeled.