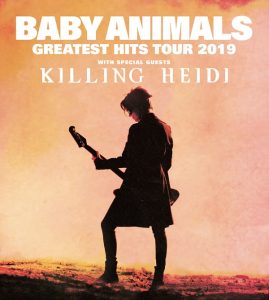 They came blazing out of the radio with the aptly titled ‘Early Warning’. “Too young to know,” Suze DeMarchi sang, “Too old to listen.” Now, nearly three decades later, Baby Animals are all grown-up and ready to hit the road to celebrate their 30th anniversary, with special guests Killing Heidi and armed with their first best-of collection, simply titled Greatest Hits and brand new single ’How Do I Make You’.

The tour commences on May 3 at Revesby Workers Club, followed by Sydney’s Metro Theatre on May 4, Croxton Bandroom Melbourne on May 10, with two shows at Adelaide’s The Gov on May 17 and 18, The Astor Perth on May 24 and Metropolis Fremantle on May 25, before concluding in Queensland with Southport RSL on May 31 and Brisbane’s The Tivoli on June 1.

The tour is the perfect marriage of two of Australia’s most loved bands, and the first time that Baby Animals and Killing Heidi have toured together.  Between the two bands, the setlists read like a page from the great Aussie songbook – ‘Early Warning’, ‘One Word’, ‘Painless’, ‘Rush You’, ‘Weir’, ‘Mascara’ – just to name a few.  Fans are in for scorching night of rock and pop! 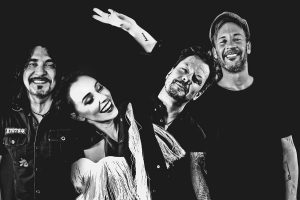 Baby Animals have been one of Australia’s biggest bands since they burst onto the scene with their self-titled debut. The band was touring with Van Halen in the US when they heard the album had topped the charts. Baby Animals spent six weeks at number one in Australia – keeping Nirvana’s Nevermind out of top spot.

Baby Animals was later featured in The 100 Best Australian Albums, with the book explaining: “Baby Animals exploded on the Australian music scene with a bracing fusion of heavy metal bravura, a touch of glam dynamics and a look and a swagger.”

Fierce and uncompromising – the first single from the band’s second album was called ‘Don’t Tell Me What To Do’ – Suze DeMarchi was also featured in the book Rock Chicks, The Hottest Female Rockers from the 1960s to Now. “Baby Animals was like a breath of fresh air,” the book stated, “a hard-rocking band fronted by a guitar-wielding, tattooed temptress who could rock with the best of them.”

To accompany their forthcoming tour with Killing Heidi, fans are in for a real treat, with a brand new smokin’ hot Baby Animals single dropping on February 15.  Picture this – the summer of 1980. A teenager with big rock dreams is at her family’s Perth home, listening to one of her idols, Linda Ronstadt. Fast-forward nearly four decades and that teenager, Suze DeMarchi, has recorded a stunning version of Linda Ronstadt’s 1980 hit, ‘How Do I Make You’, with her band, Baby Animals.  It’s a 2.14-minute blast of punky power pop.

“I grew up listening to Linda Ronstadt,” Suze says, “‘How Do I Make You’ is such a great song, and it was right up our alley. Being a guitar band, we punk it up a little bit, and it’s a lot of fun to play live.”

‘How Do I Make You’ is one of three new songs on Baby Animals’ Greatest Hits, which gathers tracks from the four Baby Animals albums. 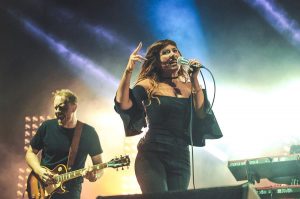 Anthemic singles ‘Mascara’ and ‘Weir’ made Reflector a blow-out success and cemented the work as one of Australia’s most loved pop albums.

The early naughties belonged to Killing Heidi with Weir placing #2 and Mascara #14 in triple j’s Hottest 100. Reflector went onto to take out four ARIA awards and reach 4 x platinum status. The Hooper siblings also won the critically-acclaimed APRA songwriters of the year award.

Ella Hooper explains, “What Killing Heidi’s music meant and still means to the people that shared that amazing time with us really blows me away. I meet so many people, especially young women, who tell me how Killing Heidi inspired them to be themselves, back themselves or even start a band, and I’m completely honoured that it had that effect on people.”

Suze DeMarchi says, “We are so pumped for this tour, and to share the stage with Killing Heidi – can’t wait to get out there and play live again!”

Tickets from Ticketek and Metro Theatre