Adam Lazzara of Taking Back Sunday 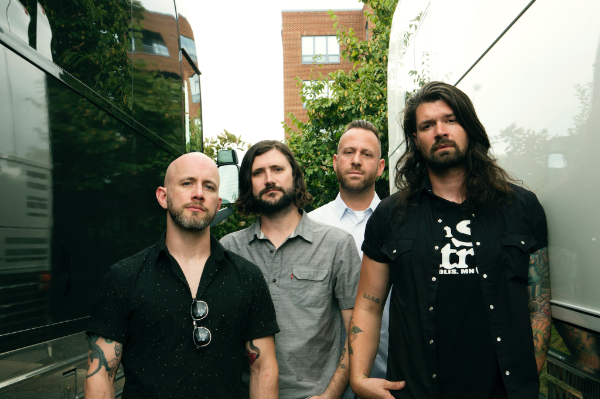 From Release: If you can’t believe that Taking Back Sunday have been around for 20 years, you’re not alone, because they can’t either. From the band’s landmark 2002 debut “Tell All Your Friends” to their most recent full-length, 2016’s “Tidal Wave”, Taking Back Sunday have evolved from a key player in the early 2000s emo scene to a genre-defying rock band who have three gold albums without ever ceasing to push the limitations of their sound. This fact is evidenced on “Twenty”, a 21-song collection set for release in January 2019 that spans all seven of their full-lengths and solidifies them as an act with a catalogue that will undoubtedly outlive them. Further celebrating the twenty years since their formation, Taking Back Sunday are hitting the road showcasing their prolific recording career performing select double album plays, including their iconic debut “Tell All Your Friends”, sophomore smash hit “Where You Want To Be” and fan favourite “Louder Now” along with a couple of other favourites and quite possibly a new song or two in Adelaide, Melbourne, Sydney and Brisbane this January.

While at home Adam of Taking Back Sunday gave us a call to talk about the band’s new compilation release ‘Twenty’, as well as their upcoming Australian tour, new music, and much more.

It’s been a good six and a half years since we last chatted, so let’s catch up, how have the last six and a half years been for you?
Oh well hey *laughs* well if I had to sum them up I’d say pretty great *laughs*. Yeah man, with everything that’s coming up or everything in the past little bit I think we’ve all been a little like looking back retrospectively and we’ve been reminded a lot recently just how lucky we are and how fortunate we are to be and just kind of that we’ve been able to do what we do and so I would say if I’m looking back on the past six and a half years *laughs* that’s kind of the biggest observation that I would make.

You’re about to release ‘Twenty’ a compilation spanning the bands career, when you have to pick songs for a release like that is it tough to narrow down what will get released?
Well it is, yes, because when they first brought it  up I just figured we’ll just put everything on there and just make it a giant box set and we can call it a day, but we wanted to have it a little more focused and thankfully we do everything pretty democratically in the band so what we did was we just all made our own individual lists and then put them together and what we found was that they were all very similar. There were only a few songs here and there that we had to just kind of sort out, for one of the early releases we have a separate record that will come with it and we’ve just called it ‘Artist Picks’ and it’s some of the songs that we thought should’ve been on there but aren’t and it’s all explained in the liner notes and looks real nice the whole deal.

With the two new songs on this release, in the two years since your last album, were these written specifically for this release or are they songs you’ve had around for a while?
No they were written specifically for the release, there’s ‘A Song For Dan’ Mark our drummer had started working on that, he has garage band on his phone so a lot of the time when we’re travelling he’ll just be on his phone all the time *laughs* and you’ll think he’s on social media or going down some internet wormhole but he’s not because he really doesn’t have any other apps on his phone other than garage band because he has so many ideas on it so he needs the space. Anyway, that was one that he started working on probably right around the time we started touring for ‘Tidal Wave’ and then so when we came together and just we throwing ideas around together that’s one of the ones that really stuck out so we worked on that first and there really wasn’t much, I mean he had the whole form and everything there it was just a matter of putting words and melody to it which then John happened to have an idea that just fit perfectly in there. Then with ‘All Ready To Go’ was another one, Mark and Sean got together because they live in New York and John and I live in North Carolina so Mark and Sean went to a studio at a friend of theirs and recorded basically the bass and the drums like the general idea like the bones of the song and then sent it down here and John and I threw out ideas into it and then so a couple of weeks later we got together in the studio and just fine tuned the details and that’s how they came about.

So are there plans for another full release soon or are we just going with these two tracks for a while?
Well we haven’t had a chance to all get together like really start nailing things down but I’ll say through the process of working through these two songs that are on ‘Twenty’, ‘All Ready To Go’ and ‘A Song For Dan’ I feel like that sparked something in everyone and so I would imagine as we’re travelling being as there’s a busy year ahead of us during the down time we’ll spend a lot of time talking about those ideas and developing them more and that way when we have time off we can get together and start working on new things.

Talking about travelling, you’re also heading back to Australia in January for Unify and for some special album shows, what was the idea behind doing these special nights on this tour?
Well for us to be completely honest when the idea was first getting kicked around of putting ‘Twenty’ out and doing a tour I wasn’t too excited about it because I never wanted to get stuck in this cycle of relying on nostalgia because I feel like we still a lot more songs in us and a lot more to do, but then it wasn’t until our manager Jillian we were talking about it one night and she says well Adam I think you’re looking at it wrong. Think about it, the band changed the course of your life and look at everything we’ve all been able to accomplish and do through that, and it’s all the people that have been listening that have made that possible so let’s go to them and let’s have a celebration and be like hey look what we did together everybody kind of thing. So that was the motivation behind the tour like that.

The last time I saw you guys was when we had a chat backstage and you were laid up with your leg injury so I’m yet to see you on stage in full force. So for someone like me who hasn’t seen that, how would you best describe a Taking Back Sunday show?
Blissful chaos I think. The thing I’ve always loved about going to shows that for however long you’re there you leave the world at the door, your worries or whatever at the door and you can go in there and get lost. I’ve been fortunate enough to where I can be on stage and make that an even bigger part of my life. One of the things too is I’ve noticed with a lot of these songs over the years that as we’re playing them the separation between what’s happening with the audience and what’s happening on the stage that just kind of goes away and we’re all part of this communal electricity together and I just always look forward to that. So I think if you’re planning on coming to a show that’s what you can expect.

Being in this band now for almost twenty years, what’s left on your list of things you want to do that you haven’t yet had the chance to do as a band?
The biggest thing is we’re always trying to chase the perfect song *laughs*, the best thing that we can write. Something going through getting the songs together for ‘Twenty’ well for me at least I’m really proud of each one of those records because I think they’re a really great snapshot, the two new songs included as of where we were at that time. So I would just like to really keep seeing it grow in that way and just being able to see the musicians and people that we’re capable of being, that’s real exciting to me. So I would say that’s at the top of my list.

So over your time together it can be easy to say what’s changed but what would you say is the one thing that’s stayed the same in your time together?
Man, I think at the core of just individually everybody’s pretty much the same person, which there’s times that maybe we’ve veered off course but for the most part we’re still these kids, when they joke about being in a band there’s like the Peter Pan syndrome like that’s very true like veer through all the years and ups and downs I’m still that same kid that joined the band and still want a lot of the same things and same for the other guys.

Lastly let’s look ahead to the future, finish this sentence for me, in 2019 Taking Back Sunday will…
Tour extensively. Very busy. It’s very rare that we have a whole year mapped out like we do now. It’s crazy because you spend so much time planning and getting ready for it that when it gets close it‘s hard to believe it’s happening just even talking about it so much, I guess with Christmas coming up there’s all that lead up to it that when it’s about to happen it’s hard to believe like man, it’s happening so soon. It seems so far away.