Sharon den Adel of Within Temptation 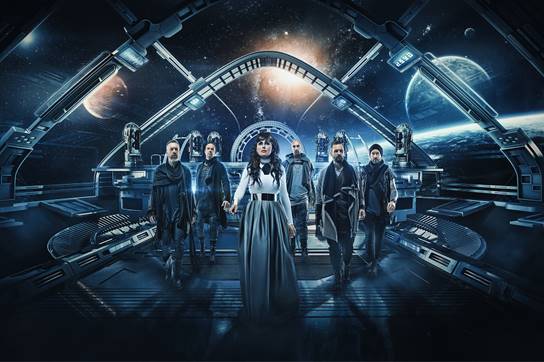 From Release: WITHIN TEMPTATION – the legendary leaders of dark anthems, with a career spanning two decades – have announced their 7th album titled Resist, scheduled for release on 14 December 2018 via Vertigo/Caroline Australia. Resist marks a departure from the past; armed with ten anthemic tracks, driven by grand melodies and dark hooks, Resist brings a futuristic take on metal to the table – both instrumentally and thematically.

While at home, Sharon from Within Temptation gave us a call to talk about the band’s new album ‘Resist’, its creation, differences, touring, the future, and more.

‘Resist’ is such a strong word, tell us what it represents to you?
Not being put in a box and refusing to do what other people are trying to influence you in a way that you might see just one side of the story or the world and just trying to not be put in a box and have other people decide stuff for me, that’s what resist represents for me more or less. So for us we were very much inspired by the digital age at the time when we wrote the album as it’s the age that we grew up in but also still is developing in a rapid way so for us when I was a kid we saw the technology and thought oh wow this is endless, it’s such a good thing and still technology is always good thing in this in this element also but the way the internet and social media have developed in such a way I think there’s also a certain danger to it. Not that we have this conspiracy theory in our heads it’s more like that’s a way to influence people if they’re not careful or aware of it, if it’s politics in America or Brexit in England or people that just get certain kinds of newsfeeds and stuff and we never know, well you cat be sure nowadays what’s true news and what’s not the right kind of news and how objective it is. Of course news is never really objective, so you want to make up your own mind about things and that’s the thing we’re trying to form with this album, more like our own reflection on how we see things.

Did you go into the album with an idea or concept of what you wanted ‘Resist’ to be?
To be honest we wrote this album since last year summer to this summer *laughs* and before that I brought out an album called ‘My Indigo’ also because I didn’t know which direction Within Temptation should go musically and also I had a little bit of a writer’s block so I decided to do something a little different in the meantime so I wrote a solo album. After that when I did find inspiration again and not just me the other band members and producers we came up with this, and I think it’s a new direction for Within Temptation, it sounds pretty different than the previous albums and also I think the visuals are different to what we normally use for our band and the images.

I was going to ask about that as some of these songs are truly different, was this something you felt you needed to do with this album?
Well you know we’re always looking for development in our own musical style and to push the boundaries and to keep ourselves inspired to make music you always need a certain type of development and the need to feel free to make whatever we want to write and I think it just came out the way it did and it just felt good, so we’ve always gone by our instincts and if this feels good then we have to do it and we’ll see what our fans will think of it but most of the times when we like it the fans do too but this is pretty much different as we did in the past so I’m still a bit curious. *laughs*.

Over twenty plus years how has the bands approach to song writing changed?
In the beginnings it was just Robert and me who wrote the music and since we signed we have more people that we write with, a keyboard player and a producer so it’s been changing if you look at the people that have been writing a bit, so we expanded our team, and of course every band member does their thing when the songs are written, it’s not like we’re in some kind of basement and we’re all jamming or something, that doesn’t work for us we need to write separately and it works better for us in this way. I think it’s an organic thing how you write music because you have new programs every time, there’s new things and everything changes it’s like language, you don’t use the same words as ten years ago it just changes and is an organic kind of thing, and in twenty years that has changed also how you make music.

Of course I have to ask, when do you think we might see you back in Australia?
I really don’t know, it’s something we have to look into as to how were gonna plan the rest of the tour and it depends a little bit also on how this year goes. We just had a very long break, well I had to be away from the band for a little while as I was having some problems, I had some issues at home *laughs*, writers block and a combination with some stuff that I had to deal with from the past, so that’s the reason we didn’t bring out an album for four years, almost five years. The thing is for the future we’re gonna take it easy, we’re gonna tour everything again how we did it in the past but we’re gonna take it also with more rest in between because I think we toured a lot in those twenty years and there’s been a lot on the road and we all have families nowadays, so making big and long tours that’s not something on our agenda. What we do want to do is like do the same amount of shows but have more at home in the meantime, like two weeks of touring then a week home, then two weeks of touring again instead of just going for weeks and weeks after each other and losing it a bit.

As a part of this band now for over twenty years, over that time what for you has been the most rewarding part of being in Within Temptation?
I think the most rewarding, being in the band that we are, being in the band period is very much rewarding and probably the only job that you get cheered at *laughs* for us of course it’s beautiful that so many people still like our music and we are still able to do what we’re doing, this is our passion and it doesn’t feel like something like work or anything *laughs* it’s the best of both things of course. If you can do this that’s your biggest passion and have bread on the table.

So is there something you want to accomplish in your third decade with this band that you haven’t yet done in the first twenty years?
No not really, just the most beautiful thing of being in a band is just making music and just being on tour and presenting the music of course, that’s the basic and the most fun thing to do and to meet beautiful people on the road, people with beautiful stories and we run into very special people along the way that have stories with our music and that makes it extra special because of course you’re vision on your music but they bring it in a different light again how they receive the music and how they look at it. We’ve met a lot of really beautiful people along the way, that’s kind of enriching for the band and for our personal lives I think.

Over time it’s easy to say what can change but what would you say is the one thing that’s stayed the same in your time making music with Within Temptation?
I think the passion, this is of course for every band I think. I think the core of the band never really changed, the way that we look at music and how we experience it, the fire that we have when we started is still there and that I think is the main reason to go on with making music, when you lose that kind of fire that you don’t really think you can make any difference anymore with your music *laughs*or if you can’t bring anything that anyone wants to listen to then it’s really time to stop. As long as you have that fire like oh I really have a nice song here we really want to play this one and I want to play it with the same kind of fire as when I wrote it, that’s the thing that keeps going, the fire is still there.

Lastly let’s look ahead to the future, finish this sentence for me, in 2019 Within Temptation will…
Be on tour very much and doing a lot of festivals in the summer.

And coming to Australia ?
*laughs*Who knows? We don’t know yet the plans completely for next year so it’s something in debate.