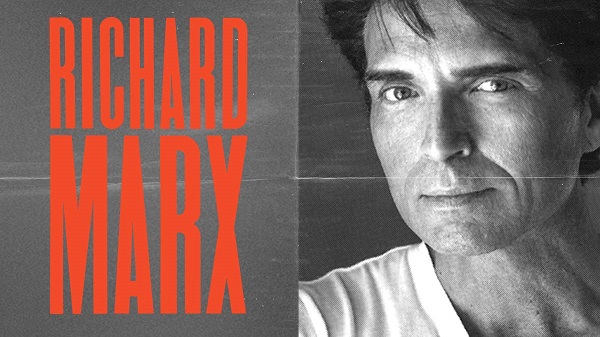 Australia has been (right here) waiting for two and a half years for the dulcet tones of Richard Marx to return to Australia. Tonight at the iconic State Theatre he’s back and we’re getting ready for hopefully an endless summer night of amazing tunes. OK, enough Marx puns, as they could be considered a Hazard. Oops, sorry!

Australian artist Matt Cornell opens up the show tonight as he has before on a previous tour for Richard Marx, standing up on a stage with just an acoustic guitar can be daunting but Matt belts out his tunes with such confidence and with ease. These catchy songs should be all over modern country radio and they seriously rival anything coming out of that genre at the moment. The room was silent and listening to him play which is testament to a performer holding their own with a great voice and great songs. If you haven’t heard any of Matt’s four albums I suggest you check out what he’s putting out as you too may just be like the lady who was sitting in front of me looking up who he was while he was playing.

A video introduces the show that showcases Richard Marx’s phenomenal career and even though we already know about what he’s done if you’d followed his career you’re still blown away just what he’s done and for how long. As the crowd cheers Richard walks on to the stage and with a strum of his Les Paul the band jumps straight into ‘You Never Let Me Down’ and that voice is still there and as smooth as ever. Oh yes, as the drums and we clap along a few catch on as to what’s next and once he opens his mouth with that opening line of ‘Endless Summer Nights’ they all now get it and hearing a big one like this so early is a treat.

Oh man! Then he goes and throws in my favourite next?! This rules. ‘Take This Heart’ is one of those catchy songs that Richard Marx just wrote so well and even over twenty five years on it still stands up, plus it has that kick ass bit before the solo. This is just going to be hit after hit and here we go again, ‘The Way She Loves Me’ is kicked off by some great riffing from guitarist Kevin but followed up with that raspy soul you want to hear from his voice.

After a great chat and funny story and an offer for everyone to stand up which sent everyone running up to front we get back into the time machine of “fluffy mullets” for the brilliant ‘Angelia’ which could be written now and still be huge and that’s what’s so good about his song writing, say what you want but this shit is timeless and also why he’s still writing hits this many years on. The band leaves the stage leaving only Marx to sit at the piano for a version of ‘Fly Me To The Moon’ and smooth as silk it is but he stops mid song as he tells us he was just jamming as he then does with some ‘Easy’ and he reveals he’s the background vocalist in Lionel Richie’s ‘All Night Long’ and tells us the funny story that goes with it. Look it up!

Here’s one of the promised songs we probably wouldn’t know, ‘Turn Off The Night’ and what a song. After another hilarious story he sits down with an acoustic for a hell of a sexy song in ‘Keep Coming Back’ which damn. Nailed it. Telling us a story of a song he wrote with Matt Scannell of Vertical Horizon and he honestly has the place cracking up which is the best. Playing the song to a video of his sons as the band and this is impressive, the song is called ‘When You Loved Me’ and that was the new one from Richard Marx… up next, Lady Ga Ga. Yeah, you had to be here…

As a songwriter Richard Marx has written some huge hits and tonight he’s putting his voice and band to a couple, come on, Vixen!! First up is ‘This I Promise You’ by *NSync and needless to say this version is much better in my opinion. Now a bit of Keith Urban with ‘Long Hot Summer’ and I have to commend artists not scared to play songs that are theirs but also aren’t. Plus these versions rock. I’m currently on the edge of a broken heart due to the lack of that song, but we head back to the originals and ‘Just Go’ which I don’t know, but do now and love. That seriously rocked. Now he pulls the stool back to the front of the stage to play us his first real country song which is hilarious. Oh man this is the best. ‘How Can I Miss You?’ is perfection, and if you go and see Richard Marx live and he plays this, you’ve completely got your monies worth simply from this song.

One line of ‘Burn For You’ by John Farnham was enough to have the diehards salivating but then ‘Hold On To The Nights’ starting with an acoustic guitar to a silent room is something to witness and as the band start in the song starts to fill out it blends seamlessly into ‘Now And Forever’ which is in my opinion one of the damn nicest songs ever written. The guitars come back out to rock the place back up with a 2018 version of ‘Satisfied’ and as people boogie along to it and with a crowd sing along they belt the tune out and once done leave the stage for well, a minute.

Returning and straight into ‘Hazard’ and this has always been one hell of a story telling tune and here comes the awesome bit, yes! Gotta love a middle 8! It’s obvious how big this song was for Marx, hearing the way he turned the microphone onto the crowd and how they sang it back with such adoration was just a pleasure to witness. After band introductions we get another mullet song with ‘Should’ve Known Better’ and of course we all sang along and that was fun, I felt like I was a kid again. Heading straight behind the piano and hitting those opening notes to ‘Right Here Waiting’ and of course it’s the one we’ve been waiting for. The crowd cheers and his voice is simply pristine, what a song. He steps away from the piano, throws a guitar back on and they rock the outro to this classic and to close the show.

Tonight shows that an artist from the 80’s who looks after their voice can still deliver the songs perfectly, with a whole lot of humour thrown in tonight Richard Marx not only sang his way into our hearts again but had the room in stitches and that is what an entertaining evening is all about. We’ll be right here waiting for him to come back… yeah, OK the puns can stop now. Satisfied?

Set List:
You Never Let Me Down
Endless Summer Nights
Take This Heart
The Way She Loves Me
Angelia
Fly Me To The Moon / Easy
Turn Off The Night
Keep Coming Back
When You Loved Me
This I Promise You
Long Hot Summer
Just Go
How Can I Miss You?
Hold On To The Nights
Now And Forever
Satisfied
Hazard
Should’ve Known Better
Right Here Waiting