PAUL LAINE to rock Melbourne for one night only! 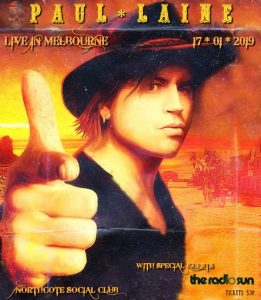 Canadian singer & songwriter Paul Laine will play a one off electric show in Melbourne, Australia at the Northcote Social Club on Thursday 17th of January 2019. Paul Laine is one of the best vocalists in the melodic heavy rock genre, having released solo material, albums with US hard rockers Danger Danger, Dark Horse and The Defiants – one of the best hard rock albums of the past few years.

Paul Laine has also sang backing vocals on albums such as Poison‘s Flesh & Blood, Scorpions‘ Face The Heat, Hinder, Boys Like Girls and many others.

Special guests on the night will be locals The Radio Sun, whom have been making quite a name for themselves by appearing at world renowned rock festivals such as Sweden Rock, Hard Rock Hell AOR and Melodic Rock Fest.

This will be Paul’s third visit to Australia, so get in early to avoid disappointment. It will be a night not to be missed for fans of hard rock.