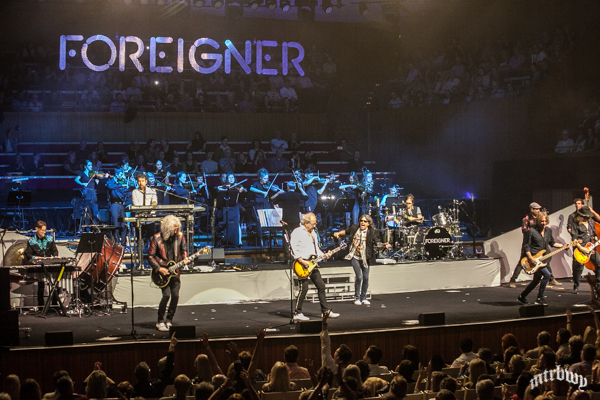 If it feels like the first time tonight it actually is. This is my first time seeing Foreigner, that’s crazy right?! But what better way to start than by being at the Sydney Opera House to see them with an orchestra.

The lights dim and the orchestra take their place on the stage as they make that ‘let’s all play at once and get ready noise’. Kelly Hansen comes out and explains the premise of the show as the orchestra begin and you can just tell this is going to be something else. As this is the overture they’re playing parts of the Foreigner catalogue and the guy on the cello at the front, this guy rules!

The band take their place on the stage and instantly this is musical perfection. ‘Blue Morning’ Wow! The three guitar assault is huge and just watching the way this band works is outstanding. Mick Jones at 73 is still ripping it up and does it well and if this is the start of the show then I cannot wait to see what the next ninety or so minutes has in store for us. As the keyboard is wheeled out and Mick hits those opening notes of ‘Cold As Ice’ hit the place cheers and the strings here make this song a masterpiece. Watching Bruce Watson aka not Brian May play the solo in this was the best but when Kelly took to the crowd, literally and walking across the seats before making it back to not miss a note was something I haven’t seen in this venue before. Tonight really is going to be something special. Hit after hit as ‘Waiting For A Girl Like You’ is up next, and that smooth bass from Jeff Pilson with the orchestra just works and Kelly is nailing these vocals beyond belief. Mick stays on the keys as ‘That Was Yesterday’ sounds as good as it ever has.

The “acoustic part of the show” begins as the band all take seats at the front of the stage and even Thom Gimbel wows us with his flute playing skills all leading into the song I was most excited to hear ‘Say You Will’ and wow, these harmonies and this arrangement is just great. I’m loving watching the orchestra behind the band as a few of them are singing along, just brilliant. Mick tells us the story behind the next song from the movie ‘Stir Crazy’ which is ‘The Flame Still Burns’. This is magnificent. A big ballad done this way with the way the strings and the orchestra fill this song out is simply beautiful. This ends the acoustic part of the set.

Old mate on the cello takes centre stage again before the band explode back onto the stage electrified and ‘Double Vision’ was an awesome choice. That rocked. Kelly stays on stage to discuss the workings of the night and to introduce the people on stage and of course the band then we go back to the first time… yes ‘Feels Like The First Time’ and the crowd are on their feet and a song this classic truly holds up and Mick just shredded that solo! Yes!! Bringing the horns to the front and taking us back to the first album ‘Fool For You’ is next and this one is as R&B as you can get with Foreigner and it’s really cool to hear tonight. ‘Dirty White Boy’ is up and as Thom takes the solo on the sax this one is horny indeed.

The intro for ‘Urgent’ was brilliant and that’s what it’s all about, that was straight up rock and roll with a twist tonight. The band is as tight as you’d expect and the saxophone solo from Thom once again was note perfect. The crowd were on their feet again and it was obvious they were waiting for that one. The band leave the orchestra on stage to play and intro what will become hopefully ‘Jukebox Hero’ as drums and keys return to keep the beat. Kelly walks back out and yeah here it is ‘Jukebox Hero’ which turned into a rocker of mass proportions. Mick Jones is a machine up there and this band behind him flawless. Wow. That was epic!! Just epic.

The band leave the stage and the lights go down but as the orchestra stays I’m pretty sure they’re coming back. Oh yeah that wasn’t long. The groove is happening and love is happening and it’s time a big one. ‘I Want To Know What Love Is’ will be massive and as a choir comes out to fill this song out even more you can feel the power in this massive hit from the Foreigner catalogue. It was delivered with passion and the song was just unbelievable in here tonight, as I said before it’ll be very hard to listen to some of these songs now in their normal state after witnessing this tonight. The orchestra departs and as s rock band Foreigner are blowing the roof off this place with ‘Hot Blooded’ to close the show, just to prove to everyone that they can still rock and they did just that!

I don’t feel like I need to wrap this one up, just read everything above this, tonight was truly special and truly spectacular.

Set List:
Blue Morning
Cold As Ice
Wait For A Girl Like You
That Was Yesterday
Say You Will
Flame Still Burns
Double Vision
Feels Like The First Time
Fool For You
Dirty White Boy
Urgent
Jukebox Hero
I Want To Know What Love Is
Hot Blooded