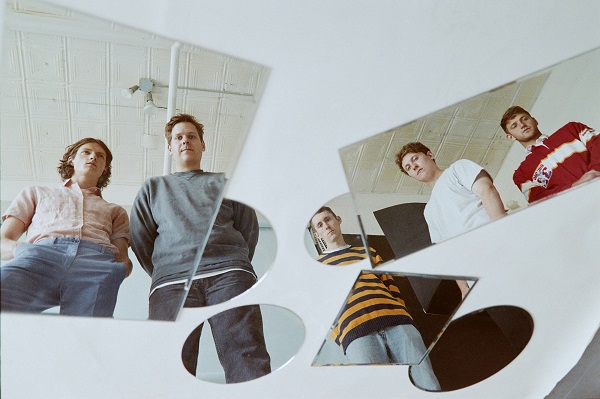 Formed in Ipswich, England, Basement ­is comprised of brothers Andrew Fisher (vocals) and James Fisher (drums), Alex Henery (guitar/vocals), Ronan Crix (guitar) and Duncan Stewart (bass). Together they have earned global acclaim for their deeply personal and earnest compositions. Beside Myself finds Basement’s introspection unfolding over a collection of punk-charged alternative classics. Tracks such as Disconnect, Be Here Now and Stigmata shine on Beside Myself, as Fisher’s acute self-awareness unfurls over deeply-rich studio recordings.

While crossing the border from Nevada into California and driving on the way to San Diego Andrew from Basement gave us a call to talk about the band’s new album ‘Beside Myself’, creating it, touring, the future, and more… check them out, they just may be one of the Best Things You’ve Never Heard!

Let’s start with this, ‘Beside Myself’ is your fourth album, so can you give me four words that you feel sum it up perfectly?
It feels pretty good.

As the artist when you’ve had this album ready for a while, what are your feeling like leading up to release time?
It’s a mixture of like impatience and almost a point of anger because you’re so frustrated because you want to get it out and this really kind of prolonged drawn out excitement, it’s like a real mixture of a bunch of emotions but the most prevailing one for me this time has been excitement just because I’ve kind of allowed myself to ignore it for a bit then all of a sudden interviews started coming up and we started doing videos and stuff and I though oh actually now you’re kind of getting closer to the time and can focus on the excitement but there’s definitely an element of frustration because a lot of the songs are like two years old and we finished recording it in March and it was a very long process. I get it, that’s how it is but yeah now I’m excited.

What is anything did you set out to do differently with this album that you haven’t done on any of your past releases?
The main thing really was just to take our time and really focus on any kind of aspect we could make sense of and try our best to do that, so we spent a lot more time writing, we spent a lot more time together writing, we spent a lot of time preparing the actual recording of it, we did lots of rehearsals and stuff beforehand so when we went in we weren’t really writing stuff unless it happened organically we were going in saying, right, we’ve got X number of songs let’s do these. That’s another thing, with the number of songs we had while we were in the studio we ended up recording and cutting them off as well.

A song like ‘Disconnect’ is just a hook laden slab of goodness, when you hit a groove like this does it help start to shape what the other songs then become?
Definitely and funnily enough that was one of the first songs we did, and that was like the first song as a group that really resonated with a  lot of us and that was almost like the anchor point, like right, let’s just try and use this and no matter what happens we’ve got this and this is like the benchmark and see how things fit alongside it but we weren’t worried too much about whether or not other songs did work with it we just kind of went with it and well what I think making it work and stick together, but that was a really good thing to have that starting point to then reference and feel good about it rather like whether or not we’ve gone too far from it.

Over the course of the last seven years and four albums how if in any way has your approach to song writing changed?
It hasn’t really changed too much, I was a lot more willing to kind of take on others people’s ideas, like before it was like “oh this is my song, this is how it should be don’t change it” whereas now I’m showing things to people and having them put their take on it and to change it and arrange it and do what they will with it. Besides the actual sitting down to write the songs, that’s the same it’s been since I was twelve years old, just get a guitar out, have a little fiddle and have a thought in my head and start writing it down on a piece of paper and that hasn’t really changed at all.

Now, you’ve been to Australia before, but are there any plans for you to head back and see us soon?
Yeah we want to come back as soon as possible, literally as soon as it can happen, we’re already looking at dates and I can’t say anything more than that *laughs*. We love it out there, we love playing out there, we love everyone we’ve met there, the shows have been incredible, they’ve been great from day one but they keep getting better and better, so as soon as the opportunity presents itself we will 100% be flying over.

So over your time together it can be easy to say what’s changed but what would you say is the one thing that’s stayed the same in your time together?
Probably, no that’s changed… I was going to say our enthusiasm for it but I feel like that’s actually gotten better, I feel like everyone’s starting to be even more driven, so I don’t know what’s stayed the same other than the five people. I don’t know if anything’s stayed the same… I mean that in a good way though as like the things that have changed they’ve changed for the better because you learn like anything in life you learn as you’re doing it and there’s so many things we learned by doing the hard way and finding out by doing it that way.  So I’m kind of glad of glad that things have changed because that means it’s growing, like for example preparing for the record with songs rather than writing them in the studio. Like I don’t know how I ‘m singing the songs before I go in the studio, trying to record a song differently to how I’m humming it in the back of my head is a different thing. I don’t know, I’d have to really think I don’t think anything’s stayed the same.

Was there one piece of advice you were given when you started making music that you still go back to to this day?
I wasn’t really given any advice, I was quite independent in regards to wanting to be in bands and my Dad’s always said the voice is an instrumental tool and he’s got a great voice and always happy but I always had a drive for whatever reason for myself. I don’t know, not really.

Lastly, let’s look ahead to the future, so finish this sentence for me, in 2019 Basement are going to…
Start writing again probably, I think we spent so much time writing and creating this record that I think in the back of our heads we should really start to think about doing it again, and that’s not to put this to one side because we want to release it and do the whole cycle off it and tour and play the songs, but one of my favourite things about being in the band is being able to write songs and create with other people, so it’s more than likely by the end of 2019 we’ll be writing again.

Latest release: Beside Myself (Out now – Warner Music Australia / Fueled By Ramen)