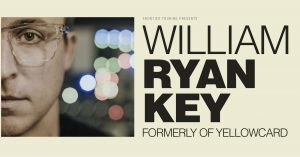 Having just wrapped a full US run supporting New Found Glory, Key has wowed critics and fans alike with his new sonic direction.

With Yellowcard coming to an end in 2017 following eight albums and almost two decades of touring, it was time for Key to embark on a personal, authentic change – and he’s done just that with his debut solo debut EP Thirteen, self-released May 25 via his imprint The Lone Tree Recordings.

Much like how his former band, Yellowcard, were a constantly shapeshifting and powerful collective, Key’s songwriting prowess is evident from the onset.’ – newnoisemagazine.com

‘The sound might be different but the heart and lyrical sincerity remain very much the same, creating a perfect segue between then and now.’ – crypticrock.com

‘Beautifully produced, sonically soft and melodic, Thirteen ensures that Key’s songwriting ability is on full display. If this is just the start of Key’s solo career, then look forward to what’s to come.’ – deadpress.co.uk

Thirteen marks a new beginning for Key, both a sonic redirection and a rediscovering of his muse. It finds Key in a brand new headspace with a sound which moves away from the pop punk genre that Yellowcard helped create, and into new uncharted territory that’s equally introspective, but not as anchored in convention.

“It took a long time to find my own focus and direction after 17 years in a band. However, once I found it, the music felt like coming home. There was new freedom and creativity that I channeled into each of the songs.” – William Ryan Key

Coproduced and mixed by Arun Bali (Saves The Day), Thirteen is a pivotal mark in Key’s life. “2013 was a really difficult year for both me and the people I love,” he says. “When writing, I was looking back on the journey from then until now.” Re-adding ‘William’ back into his full name was another important change, with fans previously knowing him just as ‘Ryan Key’. “William is my first name that I carry from my maternal grandfather,” he explains fondly. “He was always a huge inspiration to me so it’s an honour to use his name.”

With Yellowcard, Key sold out multiple venues across Australia on their The Final World Tour in February 2017. Since forming in Jacksonville in 1997, Yellowcard delivered huge anthems including ‘Only One’, ‘Ocean Avenue’, ‘Hang You Up’ and ‘Way Away’.

Now, with a new direction in life and a whole new sort of independence as a solo artist, Key is feeling the freedom of expanding his personal songbook. Key is, as always, thankful to his fans who have supported him through his musical journey: “I can only hope that this release is the beginning of a new chapter both for myself, and for the fans that have supported me for so very long.”