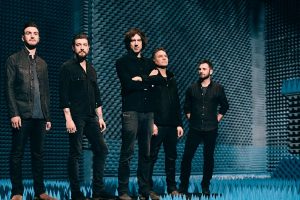 SNOW PATROL make their return to Australia next month and have today announced a Sydney performance on Saturday August 4 at ICC Sydney’s Darling Harbour Theatre to coincide with their Melbourne show at the iconic Palais Theatre on August 2.

Tickets for the Sydney show go on sale at 2pm Thursday, July 11.

Since breaking into the mainstream in 2003 with their mega-selling album “Final Straw”, Scottish-Irish alt-rockers Snow Patrol have returned with their first new music in seven years. The song-makers behind the smash hits ‘Chasing Cars’, ‘Open Your Eyes’ and ‘Run’ have garnered an impressive number of critical and commercial accolades. With more than 15 million global album sales, 1+ billion global track streams and five U.K. Platinum Albums, Snow Patrol are Grammy, BRIT Award and Mercury Music Prize nominees and their long-awaited return has fans all over the world going gaga.

Since appearing on “Later… With Jools Holland” earlier this year, where they debuted a live rendition of their second single ‘Empress’ from their forthcoming record “Wildness”, alongside performances of ‘Life On Earth’, ‘Heal Me’ and ‘Chasing Cars’, their new album finds the band searching for clarity, connection and meaning, while staying true to the melodic songwriting prowess that brought them to prominence. Of the new record, lead singer and songwriter Gary Lightbody said,

“There are many types of wildness, but I think it can be distilled into two: the wildness of the modern age, all its confusion, illogic and alienation and a more ancient wildness. Something primal, alive and beautiful that speaks to our true connectivity, our passion, our love, our communion with nature and each other. This is the kind of wildness the album is centered around. The loss of it. Trying to reconnect with it. To remember it.”

Australian fans who have been waiting since 2012 for the bands return, will be among the first in the world to experience the hits and new album material in all its splendor.