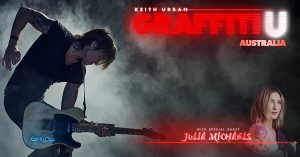 General public tickets go on sale at 11am on Monday 6 August via www.ticketek.com.au, with the TELSTRA THANKS pre-sale beginning at 10am on Wednesday 1 August.

“This GRAFFITI U WORLD TOUR is by far the most insane energy we’ve ever seen at our shows. I always love being able to bring the tour to Oz, but to also have Julia Michaels with us this time is incredible – and will be the first time we’ve ever toured together,” said Urban. “The way the record has been embraced here too is extraordinary – so being able to bring those songs to life and have everyone singing them with us will be seriously awesome!”

Urban is known as one of the best live performers in the business and has been praised as a “brilliant and consummate performer,”* and “a master in concert.”** His last tour of Australia was the sold-out “ripCORD WORLD TOUR 2016,” which boasted sales of nearly 100,000 tickets, playing to sold out arenas everywhere. In Canberra Urban played to the biggest audience assembled in the ACT in the last decade and was bestowed the honour of opening Sydney’s ICC Theatre.

Joining Urban on his “GRAFFITI U WORLD TOUR AUSTRALIA” is American superstar, Julia Michaels.  With a CV that boasts songwriting credits for the likes of Shawn Mendes, Justin Bieber, Selena Gomez and Britney Spears, Michaels burst into the spotlight with her hit ‘Issues’, reaching No. 5 on the ARIA Singles Chart.  Michaels teamed up with Urban last year to write the infectious single “Coming Home,” on which she also contributes guest vocals.  It will be Australian fans’ first opportunity to see Michaels live in arena setting.

Of the opportunity Michaels said, “I am so excited to be joining Keith on his “GRAFFITI U WORLD TOUR AUSTRALIA.”  Keith is an incredible artist and one of my favorite human beings, and I can’t wait to hit the road with him.”

GRAFFITI U is Urban’s first new studio album in nearly two years.  The highly anticipated follow up to 2016’s record-breaking, #1 Platinum album RIPCORD,GRAFFITI U is a natural musical progression that began with Fuse, but it also marks where Urban currently resides creatively.

Keith Urban has total of 14 ARIA Platinum selling singles and albums and has scored 5 ARIA Awards.

“Urban is a master in concert”  The Australian 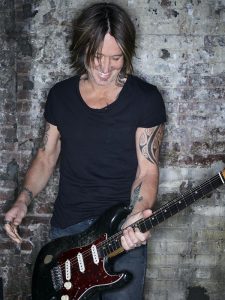 General public tickets go on sale at 11am on Monday 6 August via www.ticketek.com.au with pre-sales beginning with TELSTRA THANKS at 10am on Wednesday 1 August and concluding at 10am on Friday 3 August.   For more: www.telstra.com/keithurban