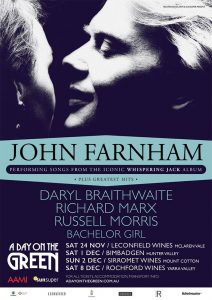 JOHN FARNHAM’s iconic Whispering Jack may be one of the most successful Australian albums of all time, but it’s so much more than that. It’s a record that is indelibly marked in Australia’s collective consciousness, an album that means so much to so many people.

In news that will thrill fans across the country, it’s time to relive all that this summer whenJOHN FARNHAM performs songs from Whispering Jack for a special series of a day on the green concerts. John and his amazing band will play the much-loved 1986 album, plus a selection of other greatest hits.

Joining John will be a stellar cast of guests – DARYL BRAITHWAITE, US singer/songwriter RICHARD MARX, RUSSELL MORRIS and BACHELOR GIRL.

Tickets go on sale 10.00am on Friday July 13 from Ticketmaster.

Manager Glenn Wheatley said: “John enjoys doing these outdoor shows. The environment and the audiences are always great. And he loves performing the ‘Whispering Jack’ songs – he knows how much this album means to the fans. It will also be good to hear Richard Marx again.”

Roundhouse Entertainment Promoter Michael Newton said: “How fantastic it will be to hear all those great Whispering Jack songs again! The album has undoubtedly stood the test of time – it’s a testament to John’s extraordinary career. It’s such a thrill and honour to have John play these classic tunes for a day on the green audiences.”

Released in 1986, Whispering Jack had a profound effect on Australian music. It was the first local album to sell more than one million copies, it held the number one position on the charts for a staggering 25 weeks, sold a remarkable 24 times Platinum, won every award going and produced a bona fide Aussie anthem in You’re The Voice. It remains the highest selling Australian album of all time by an Australian artist with more than 1.7 million sales.

The 19-time ARIA Award winner and all-round top bloke continues to be “The Voice” of Australian music, thrilling audiences with his onstage charisma and those incredible vocals. John has had an extraordinary career with hits in six decades, and in 2013 was voted Australia’s greatest singer of all time by a panel of his peers and the general public.

Joining John will be another Aussie music legend and a day on the green favourite,DARYL BRAITHWAITE. With an arsenal of hits including Howzat, Summer Love, Rise, One Summer, As The Days Go By and his now classic The Horses, Daryl’s career spans more than five decades, with audiences of all ages embracing him. Daryl was an incredibly popular ARIA Hall of Fame inductee last year.

Grammy Award winner RICHARD MARX returns to Australia to make his a day on the green debut. A prolific singer, songwriter and producer with more than 30 million album sales over the past three decades, RICHARD MARX remains the only male artist in history to have his first seven singles reach the Top 5 on the Billboard charts. With a loyal Australian following, Richard enjoyed eight Top 40 hits including number one singles Right Here Waiting and Hazard. With other smash hits like Should’ve Known Better, Endless Summer Nights, Satisfied, Angelia, Keep Coming Back, Take This Heart and Now and Forever, his songs have stood the test of time.  Currently on tour in America, he has just released the single, Dance With My Father, his version of the Grammy Award-winning song he wrote with Luther Vandross.

Richard is also a long-time John Farnham fan and is looking forward to a reunion on the upcoming tour. He co-wrote four songs on John’s 1993’s number one and ARIA Award winning record, Then Again, and in a nice touch, presented John with the ARIA Award for Highest Selling Album. When Richard first heard You’re The Voice he says it changed his musical life. “I became obsessed with John Farnham. I think Sam Cooke is the greatest singer who ever lived. I think John Farnham is the greatest singer alive!”

ARIA Hall of Fame inductee, number one selling Platinum artist, King of Pop, Australian Icon … these are a few phrases used to describe Aussie legend RUSSELL MORRIS. From his early pop hits The Real Thing, The Girl That I Love, Sweet Sweet Love and Wings of an Eagle, Russell was reborn in 2012 with the blues/rock album Sharkmouth, earning his first Top Ten album and ARIA award at the age of 64! The follow-ups, 2014’s Van Diemen’s Land and 2015’s Red Dirt – Red Heart, also topped the ARIA charts. As one of Australia’s finest singer-songwriters, Russell is indeed The Real Thing!

Twenty years since the release of their double-Platinum hit single Buses and Trains and their ARIA Award-winning debut album Waiting For The Day, BACHELOR GIRL – Tania Doko and James Roche – have re-formed to mark their 20th anniversary and released a brand-new single Speak, their first collaboration in 12 years. One of the biggest and most-loved Australian acts of the ’90s, the band released hits including Treat Me Good, Lucky Me, Permission To Shine, Blown Away, I’m Just A Girl, as well as a cover of Duran Duran’s Come Undone.

With its across-the-board appeal and songs that continue to be discovered and loved by new generations, this is sure to be an unforgettable a day on the green concert.

ABOUT A DAY ON THE GREEN:
This summer marks the 18th season of a day on the green, which started in January 2001.  After 453 shows and more than three million happy patrons, the a day on the green experience of good food, fine wine and great music in magnificent locations is firmly established as one of Australia’s most popular concert events.

EVENT INFORMATION:
a day on the green is a fully licensed event. Strictly no BYO alcohol. Food will be available on site or BYO picnic. Camping chairs and picnic rugs are recommended. For all transport, accommodation and event information, go to www.adayonthegreen.com.au

And because we all can’t get enough of Whispering Jack, here are 21 fabulous facts!

21 WHISPERING JACK FACTS
1. Whispering Jack was released October 20, 1986.
2. Whispering Jack was the first Australian album to be manufactured on CD in Australia.
3. Whispering Jack was the first Australian album to sell one million copies in Australia.
4. Whispering Jack remained at number one for a staggering 25 weeks!
5. Whispering Jack is still the highest selling album by an Australian artist in Australian chart history with more than 1.7 million sales / 24 times Platinum.
6. The anthemic first single You’re The Voice returned John to the top of the charts for the first time in 17 years since 1969’s Raindrops Keep Fallin’ On My Head.
7. You’re The Voice was also a Top 20 hit for John in the UK (6), Ireland (3), Austria (6), Belgium (20), Canada (12), the Netherlands (15), New Zealand (13), Switzerland (3) and hit number one in Germany and Sweden.
8. You’re The Voice was originally written as a British protest song by Chris Thompson, Andy Qunta, Maggie Ryder and Keith Reid.
9. One song that didn’t make the cut for the album was We Built This City, which went on to become a hit for US band Starship. John and the album’s producer Ross Fraser received a demo of the song but knocked it back.
10. John debuted You’re The Voice on Hey Hey It’s Saturday. As he performed, Wilbur Wilde commented to Glenn Wheatley, “Put your house on that one!”, not knowing that Glenn already had! With no record label when he started recording Whispering Jack, Glenn famously mortgaged his house to raise the funds to record the album.
11. The drums on the demo of You’re the Voice were a car door being slammed in John’s Bulleen garage. They later upgraded to the sound of a Porsche door being slammed in a fancier garage.
12. John Farnham’s favourite song of all time, AC/DC’s It’s A Long Way To The Top (If You Wanna Rock ‘n’ Roll) was the inspiration for the bagpipes on You’re The Voice, swapping a bass solo on the original demo, to a bagpipe solo. It’s A Long Way To The Top – John Farnham
13. You’re The Voice video features appearances by Derryn Hinch, Jacki Weaver, James and Vince Leigh (Pseudo Echo) and Skyhooks’ Greg Macainsh. You’re The Voice
14. Whispering Jack reached number one in Sweden, number two in New Zealand, number three in Switzerland and number four in Germany, as well as charting in the Netherlands and Norway.
15. Pressure Down was the album’s second single. Peaking at number four, it also charted in Germany, the Netherlands, New Zealand, Sweden and the UK. Pressure Down
16. The third single A Touch Of Paradise was originally recorded by Mondo Rock and appeared on their album Nuovo Mondo four years earlier in 1982. A Touch of Paradise – Ross Wilson and John Farnham
17. Reasons was the fourth and final single released from the album, in May 1987.
18. The inaugural ARIA Music Awards were held on March 2, 1987, hosted by Elton John. The most successful artist was John Farnham. Whispering Jack and You’re The Voice won six awards, including Album Of The Year, Single Of The Year, Highest Selling Album, Highest Selling Single, Best Male Artist and Best Adult Contemporary Album.
19. John Farnham is the only artist to perform on the first and last episodes of Countdown. Dominating the final Countdown Awards on July 19, 1987, John was the recipient of four awards winning Best Album for Whispering Jack, Best Male Performance in a Video and Best Single for You’re The Voice and Outstanding Achievement. John Farnham Countdown Awards July 19, 1987
20. US band Heart recorded a cover of You’re The Voice in 1991, with Heart’s Ann Wilson saying, “We fell in love with that song. The song is still so relevant, it may as well have been written yesterday.” You’re The Voice – Heart
21. In 2009 John performed You’re The Voice with Coldplay at the SCG for the Sound Relief charity concert. Singer Chris Martin says it was one of the first records he ever bought as a kid and one of the very first songs Coldplay used to play as a band. Coldplay and John Farnham You’re The Voice