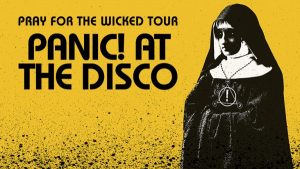 Making their return to Australia this October for Frontier Touring and performing arena shows off the back of their most ambitious release to date, two-time Grammy nominees Panic! At The Disco are back! Led by frontman Brendon Urie, their long-awaited sixth album Pray For The Wicked drops next week, and now they’re headed down under.

‘Panic! At The Disco wowed… Brendon Urie rocked through a medley of career-spanning hits, from ‘Say Amen (Saturday Night)’ to ‘I Write Sins, Not Tragedies’ – although the most memorable moment came with his rendition of ‘Bohemian Rhapsody’. He recorded the cover for the Suicide Squad soundtrack and has performed it live before, but nailed it… hitting notes that would make any Queen fan’s jaw drop.’ – Variety, May 2018

Panic! return 13 years after they first burst onto the scene with 2005’s platinum, emo-fuelled debut, A Fever You Can’t Sweat Out. Now, anticipation for Pray For The Wicked is high – just witness the video for rousing first single ‘Say Amen (Saturday Night)’ (the final instalment of a trilogy, following earlier clips ‘This Is Gospel’ and ‘Emperor’s New Clothes’). Check out the band’s recent, unforgettable live performance of ‘Say Amen (Saturday Night)’ on The Ellen DeGeneres Show here.

Meanwhile latest single ‘High Hopes’ is the most recent in an oeuvre of dizzying stadium pop, including hits ‘I Write Sins Not Tragedies’, ‘The Ballad of Mona Lisa’, and ‘Nine In The Afternoon’.

“After being away in New York doing Kinky Boots, I just wanted to hang out at home when I got back to LA,” says Urie. “I was so revved up that I asked some friends to come over to my home studio to help me write about all the incredible things I’ve experienced the last couple of years. Pray For The Wicked is my thank you to our fans and the most fun I’ve ever had making album.”

Panic!’s fifth record – 2016’s Death of a Bachelor – was a huge hit globally, debuting at #3 in Australia and also marking their first #1 on the US Billboard 200, earning a Grammy nomination for Best Rock Album. The title trackhas also produced almost 50 million YouTube views and 90 million streams on Spotify, Urie’s performance likened to legends Queen and Daft Punk by The New York Times. Last in Australia off the back of that disc, critics were raving:

‘Concluding with ‘Victorious’, Urie found the refrain “tonight we are victorious” thundering back at him from the sweat-filled hall – the perfect encapsulation of the almost inhuman love the room appeared to hold.’
– STACK Magazine

‘Smoke machines, confetti and streamers accompany Urie as he frolics about the stage amid his black-suited band members like a musical nymph, his huge vocal range and vibrato never faltering despite his giddy movements.’
– The Music

With a huge 28-city USA run kicking off in July and headlining Reading & Leeds in August, Panic! At The Disco’s unstoppable energy and a setlist jam-packed with the best of all six albums makes this a tour not to be missed!

Pray For The Wicked is released Friday 22 June via Warner Music Australia – head here to pre-order.