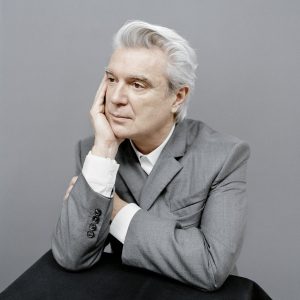 The NYC-based artist will perform songs from his acclaimed new album American Utopiaas well as classics from his solo career and his days with Talking Heads. A 12-piece band will join Byrne on stage for an Annie-B Parson choreographed concert that he has called “the most ambitious show I’ve done since the shows that were filmed for Stop Making Sense.” Annie-B Parson also choreographed the St. Vincent and David Byrne collaboration tour around Love This Giant. For NZ fans, it will be Byrne’s first tour of the country since 2009.

‘One of the most inspired, intriguing, energetic and joyful concerts in recent memory. To call it unique hardly does it justice.’ – The Calgary Herald

‘It’s honestly hard to believe the amazingness of David Byrne’s live show… Byrne radiates a joy while performing that few – if any – musicians can match.’ – Seattle Weekly

‘Decades into his career, David Byrne remains an unpredictable, vital artist. There aren’t many who can say that.’ – LA Weekly

‘A marvel of staging and motion that was at once utterly novel and oddly comforting, the evening proved a celebration of Byrne’s music at its most rhythmic and transcendent.’ – Chicago Tribune

With his sets including a wealth of Talking Heads tracks such as ‘Once In A Lifetime’, ‘Burning Down The House’, ‘This Must Be The Place’, plus Byrne’s latest stunning new solo work, his collaboration with St Vincent and more, these shows will be unmissable.

His first solo album in 14 years (following 2004’s Grown Backwards), American Utopia was released in March 2018 via Todomundo/Nonesuch Records. The first track from the album, ‘Everybody’s Coming To My House’, was co-written with Brian Eno and contributions from TTY, Happa, Isaiah Barr (leader of the Onyx Collective), Daniel Lopatin (Oneohtrix Point Never), Mercury Prize winner Sampha, and others feature throughout the release. Byrne has just released latest single ‘Every Day Is A Miracle’, also written with Eno.

“I’ve made a record that just has my name on it but is also the result of the contributions of many other people,” says Byrne. “I suspect that like me, it is asking what are we like, what do we want, and what are we looking for?”
American Utopia debuted at # 1 on the Top Album Chart in the US, the highest chart position of his career, as well as at #1 on the Canadian album charts, plus Top 20 in the UK and Ireland. The career chart highs were repeated across Europe, including in Austria, Belgium, Czech Republic, Germany, Italy, Netherlands, Portugal, and Switzerland, amongst others.
‘Byrne is a profile in American reinvention – it’s here a kind of alien found a band, an audience and a home.’ – The New York Times

‘His best record in years. His creative fires still show no sign of dimming, Byrne remains as playful and brilliant as ever.’ – Q Magazine

One of pop music’s true visionaries, Byrne has released six solo albums, collaborated with Eno, St Vincent, Arcade Fire, Fat Boy Slim, De La Soul and more; won an Oscar; founded the Luaka Bop label; turned a ferry terminal into a musical instrument, designed bike racks, and published 2012 book How Music Works. The Talking Heads leader is currently on the road in the UK/Europe, having already taken his 80+ date world tour everywhere from Santiago to Tuscany, Saskatoon to Mexico City. Read more about the tour and Byrne’s new album in in-depth interviews with The New York Times and GQ.

Byrne announced the release of American Utopia during a presentation of Reasons To Be Cheerful – an ongoing series he curates of hopeful writings, photos, music, and lectures. The presentation was given at New York’s New School to a live audience and also was streamed via his Facebook page, while fans can sign up to the Reasons To Be Cheerful website to receive Byrne’s ‘thoughts, images and audio relating to this initiative’ – head here.

‘A thought provoking example of the power of live music.’ – Forbes

‘Reports had been coming in from the east coast about how uniquely theatrical the setup is on his new American Utopia-supporting tour, and the brain that designed Stop Making Sense didn’t disappoint.’ – Variety

”This Must Be The Place’ was the first Talking Heads hit Byrne broke out Sunday, and that was immediately followed by ‘Once in a Lifetime’, during which most of the crowd stood, singing along.’ – Highway 81 Revisited

David Byrne is a Scottish-born, American artist, and one of the defining names in modern music. The American Utopia World Tour is simply not to be missed. Tickets are on sale Monday 18 June. 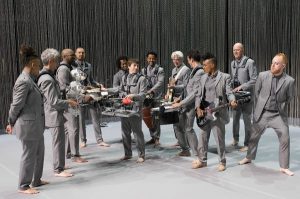