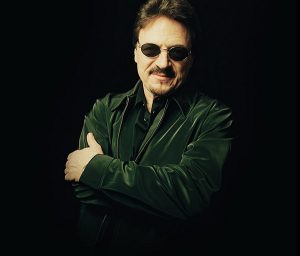 Bobby Kimball, owner of the iconic voice of one of the highest selling rock acts of all time, TOTO, will be returning to Australia for the first time in a decade to perform all the band’s big hits and more.  Joining him as Special Guest will be one of Australia’s favourite sons of rock, Mark Gable from the legendary Choirboys.

Fans can look forward to hearing Bobby Kimball perform those much loved classic TOTO smash hits – Rosanna, Hold the Line, Make Believe and of course the iconic smash hit Africa, as well as many of those classic album songs familiar to TOTO fans and material from the applauded 2006 TOTO album, Falling in Between. Bobby will also be performing several tunes from his 2017 much-acclaimed solo album, “We’re Not In Kansas Anymore” – a tongue-in-cheek nod to his days in TOTO.

Bobby Kimball was the original lead vocalist and longtime member of 80s supergroup Toto. Appearing on their first four studio albums, he sang lead vocals on such classic songs such as Hold The Line, Africa, Rosanna, Georgy Porgy, I’ll Supply The Love and more.  Bobby performed with Toto from 1976 to 1984 and then again from 1997 until they quietly disbanded in 2008.

Across 3 decades Toto sold over 30 million albums, won 6 Grammy awards including Album of the Year, Record of The Year and Song Of The Year. Their music is still heard on radio today.  Songs such as Africa and Rosanna are instantly recognisable from those very first rifts and covered by musicians and bands worldwide – most recently by US band WEEZER who covered Africa (they have previously covered Rosanna) to much media coverage.  The song has become a viral hit across the world with over 3 million plays and according to Esquire magazine, proof that this song is ‘timeless.’

“I’m just back from France from playing two shows for The Cannes International Film Festival followed by a Bulgarian show to 15,000 people. It’s been a busy 2018 but I’m so looking forward to coming back out to Australia in September!  I played out there with Toto twice and each time was a real fun experience for me.  The Aussie fans are so incredible.  I can’t believe it’s been more than 10 years since I was last there! I have a sensational band made up of the best session musicians Australia has to offer – the best of the best.  Guys that have played with the best international artists and basically the backing band for the Australian Idol and The Voice TV shows.  They are all really hot players, which you absolutely need if you are doing TOTO songs.”  – Bobby Kimball, Encino California May, 30 2018.

Mark Gable is perhaps one of the most accomplished front men in Australian music!  Lending his unmistakeable voice to the Choirboys mega hits, Run To Paradise and Boys Will Be Boys, Mark helped define a genre and produced two classic Aussie rock standards.

Run to Paradise is undoubtedly an Australian pub rock anthem, covered by nearly every pub rock band around the country each Friday and Saturday night. Rock singer, radio host, circuit speaker, Mark has survived the Australian music industry for nearly 40 years and continues to tour across Australia regularly.

Come and witness the power of two of rocks greatest vocalists, as they deliver the hits that made them the icons they are.

Tickets on presale from Thursday, 14th June and general on sale from Monday, 18th June.
Tickets via Ticketmaster and venues below