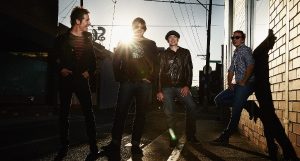 Since their formation in 1996, Dallas Crane have become a staple of Australian rock music culture. Across five iconic studio albums, Dallas Crane have produced a slew of hits including, ‘Sit On My Knee’ with Jimmy Barnes, ‘Dirty Hearts’, ‘I’m Sorry Darling’, ‘Lovers & Sinners’ and many more.

Renowned for their wildly energetic performances and gripping stage presence, Dallas Crane are true road warriors, earning the title of ‘Australia’s hardest working band’ over many years of touring. You Am I’s Tim Rogers famously acknowledged them as his favourite live band, immortalising them in the song, ‘Who Put The Devil In You?’. The veteran rockers are no strangers to the world’s biggest stages, having played alongside the likes of The Who, Cold Chisel, Midnight Oil and Nick Cave & The Bad Seeds to name a few.

One of the most influential rock groups of the past 50 years, Cheap Trick are responsible for the genre-defying global smash hits; ‘I Want You To Want Me’, ‘Dream Police’ and ‘Surrender’ among many others. Fronted by the dynamic Robin Zander, and comprising bassist Tom Petersson, famed for his 12-string bass, with Rick Nielsen on guitar and Daxx Nielsen on drums, Cheap Trick are a vibrant on-stage force like no other.

“(Dallas Crane)…a force to be reckoned with” – Sydney Morning Herald

“Scoundrels re-establishes Dallas Crane’s grip on the task of making rock songwriting sound fresh and vital. These four players are masters of their craft” – The Australian

“Cheap Trick live is uniformly tight, as blistering and raw as it is cunningly melodic” – Rolling Stone