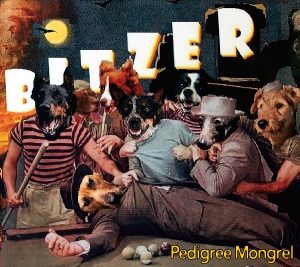 “Pedigree Mongrel” is just that! It’s a pedigree of some of the hardest working members in the Australian Music Industry delivering just the right amount of Mongrel. Its bark is far worse than its bite!” – Mick O’Shea

To get the taste buds salivating for more the first single ‘Superman’ will be launched on May 18. Adding to the immense success of the Harry Vanda/ George Young songwriting partnership, “Superman” gave Australia’s hot young singer Alison McCallum a Top Ten hit way back in 1972.

“Superman” is back, and with the full Bitzer treatment it is fully revved and soaring way past the envelope. Mick O’Shea (drums) and Steve King (bass) infuse this version of the song with a thrusting Oz rock feel that gives Mick Arnold on guitar and R’nB singersongwriter and author Lucy Desoto plenty of room to launch into an awe-inspiring audiosphere… but it is their mystery guest, Wal Thompson, whose mighty performance on lead guitar here really lifts this version of the song into the stratosphere, where
“Superman” really flies into outer-space.

Straight off the back and maintaining maximum velocity BITZER unleash their second single ‘Sunshine’ with a powerful rendition by Steve Mulry on vocals out June 1.

“In Australian pop music, this song shines with one of those golden and heart-felt choruses, exalting in the spirit of Aussie freedom. The Bitzer version of Sunshine is an uplifting homage to that musical Kiwi gift from Dragon.” – Lucy Desoto
Sunshine

BITZER have been let off the chain once again to pay tribute to some of the great Aussierock recordings and songwriters with some songs as authentic as originally recorded, and others with the now infamous BITZER stamp and branding. The rock assault of “Pedigree Mongrel” on the senses will take you back to the heydays of Pub Rock at its’ finest. Once you press play, you will listen from start to finish and press repeat over and over again.

“A mongrel of a super group comprised of several champions of the Golden Era of Australian Rock…Bitzer are a cover band, and a bloody good one, too. They focus on the best songs.” Drum Media

“Bitzer deliver the goods in no uncertain terms…this is Oz rock the way it should be played. It’s fun, it’s loud, proud, and kicks ass.” Rockbrat Report

“Bitzer is unashamedly Aussie…a blistering collection of Oz/NZ rock covers…Bitzer’s versions of these songs are even stronger and more spirited than the originals.” Altmedia

BITZER’s latest instalment, “Pedigree Mongrel” is a ten track album showcasing some of
the best iconic home grown music Australia has to offer.

“Pedigree Mongrel” Out June 15 on all digital platforms.