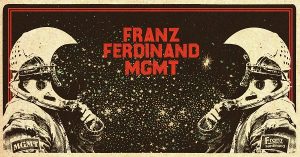 Frontier Touring are thrilled to announce that two of the most prolific bands of recent times, Franz Ferdinand and MGMT, will join forces for a pair of special co-headline shows in Australia this July.

These shows mark both Franz Ferdinand and MGMT’s first visits to our shores in five years, with co-headline performances at Melbourne’s Festival Hall (Tue 24 Jul) and Sydney’s Hordern Pavilion (Wed 25 Jul), as well as a stop at Byron Bay’s Splendour In The Grass festival.

Glasgow quintet Franz Ferdinand remain one of the UK’s biggest exports of the last two decades, and will perform in Australia on the back of announcing a huge world tour and dropping fifth record Always Ascending. Their 2004 self-titled debut album immediately propelled them to major global commercial and critical success, taking home the 2004 Mercury Music Prize as well as seeing their anthemic single ‘Take Me Out’ chart in the top ten across the world.

Fresh off the back of the UK leg of their world tour and currently performing in the USA, the quintet are looking razor-sharp ahead of their Australian shows. As noted by The AU Review, Franz Ferdinand live are not to be missed: ‘The new songs fit in well with the old material and filled the room with real warmth, allowing the band to prove that they are not content to just sit back and trade on nostalgia alone.’

MGMT are Andrew VanWyngarden and Ben Goldwasser, the Grammy-nominated duo who have been producing innovative psychedelic pop anthems since their 2008 debut Oracular Spectacular, including some of the biggest songs of the 2000s in ‘Kids’, ‘Time to Pretend’and ‘Electric Feel’. These will be MGMT’s first performances in Australia since January 2014.

After an extensive UK, Europe and North American headline tour at the start of the year that took them to a number of iconic venues, including a sold out show at London’s Electric Brixton, Paradiso in Amsterdam, and the Hollywood Palladium, the band will embark on a huge eleven-date headline US tour this May, before heading to summer festivals across the world, including Firefly, Mad Cool and NOS Alive.

The combined firepower of Franz Ferdinand and MGMT in Melbourne and Sydney this July is sure to be unmissable.