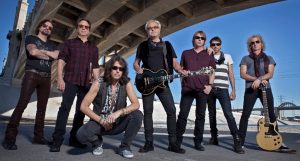 Chugg Entertainment is thrilled to announce legendary rock band FOREIGNER will return to Australia this October to perform a series of newly envisaged orchestral concerts. Fans will be treated to a string of shows in Canberra, Adelaide, Perth, Melbourne and a night at the iconic Sydney Opera House Concert Hall on Thursday 18th October. See full tour dates below.

With ten multi-platinum albums and 16 US Billboard Top 30 hits, Foreigner are universally hailed as one of the most popular rock acts in the world with a formidable musical arsenal that continues to propel sold-out tours and album sales, now exceeding 75 million.

Australian and New Zealand fans will be thrilled to witness the prolific rockers belt out all of their iconic hits with an 18-piece orchestral backing, led by celebrated Canberra conductorKenneth Lampl. Fan favourites including ‘Feels Like The First Time’, ‘Cold As Ice’, ‘Waiting For A Girl Like You’, ‘Urgent’, and the timeless #1 global smash, ‘I Want To Know What Love Is’, will bring audiences to their feet.

In addition, Foreigner are set to release the new album, FOREIGNER with the 21st Century Symphony Orchestra & Chorus on April 27th, which showcases this new orchestral format across all of Foreigner’s classic hits.

Foreigner is also slated to headline Rock the Boat 2018; a Rock N Roll paradise on the high seas aboard the Luxury Royal Caribbean cruise liner, Radiance of the Seas.Departing Sydney for seven days beginning October 21st, fans can witness the legendary rockers (and many more) whilst cruising the beautiful South Pacific.

At Foreigner’s core is founder and Songwriters Hall of Fame member Mick Jones, the visionary maestro whose stylistic songwriting, indelible guitar hooks and multi-layered talents continue to escalate Foreigner’s influence and guide the band to new horizons. He reformed the band after a 2002 hiatus and selected lead singer Kelly Hansen to help write an inspired new chapter in the history of Foreigner. Mick also brought in multi-instrumentalist Tom Gimbel, bassist Jeff Pilson, keyboardist Michael Bluestein, Bruce Watson on guitar and Chris Frazier on drums. An unprecedented new level of energy led the group to a re-emergence of astounding music that speaks to long time Foreigner fans and younger generations.

“I could never have imagined when I set out to create Foreigner 40 years ago, that we’d still be touring around the world and performing the music we love all these years later”, said Mick Jones. “Dave Eggar and Chuck Palmer’s orchestral arrangements have shown us a new symphonic dimension of our music, which I hope our fans will enjoy.”

Do not miss this incredible opportunity to see one of the most celebrated bands in music, Foreigner, perform all their hits in full orchestral sound.