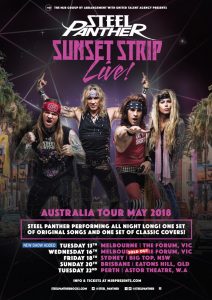 Steel Panther’s Wednesday 16th May show at Melbourne’s The Forum has SOLD OUT – a second show has been added to the tour on Tuesday 15th May at the same venue. Tickets are on sale today from 2pm AEDT for the additional show, and all other shows on the tour are selling VERY quickly. Grab tickets today for Steel Panther’s world first two-set show, Sunset Strip Live!

The Sunset Strip’s favourite sons, Steel Panther, are returning to Australia in May 2018 for a WORLD FIRST run of shows! They are returning to Australian shores with their Sunset Strip Live!Tour, which is ALL PANTHER, ALL NIGHT. Two sets – One set of Steel Panther originals, and One set of Classic Covers! Presented by MJR Presents by Arrangement with United Talent Agency, this is Steel Panther‘s third trip out to Australia since 2016 – and it seems like Australia can’t get enough of the raunchy Panther boys from LA!The Steel Panther boys are coming to Australia to show off how it all started for them – playing venues like The Viper Room in Los Angeles, playing all the best hair metal songs of all time, eventually becoming the Steel Panther everyone loves (Well, maybe not your Grandma. It kind of depends on what Old Folks’ Home she’s in!).The tour takes the boys to Melbourne’s The Forum on 15th and 16th May (16th SOLD OUT), Sydney’s Big Top on the 18th, Brisbane’s Eatons Hill on the 20th and finishing in Perth on the 22nd May at the Astor Theatre.
Steel Panther have been prolific in their output in the past few years, releasing album “All You Can Eat” in 2014, Live DVD “Live from Lexxi’s Mom’s Garage” in 2016 and album “Lower the Bar” in 2017. Their catalogue of hits is unstoppable, featuring hits like “Death to All But Metal”, “Community Property”, “17 Girls in a Row” and “Poontang Boomerang.” Last time they visited Australian shores, Blunt Mag’s writer Luke Sutton said that…”…if the decade of neon was anything like Steel Panther make it out to be, then it was one hell of a time. [Steel Panther] have made a pretty solid name for themselves Down Under: their trips are all but annual at this point, with every passing crowd growing vaster, louder, and itchier.”Don’t miss the raucous, irreverent, all-out hair metal assault on your senses (and probably your genitals) that is Steel Panther’s “Sunset Strip Live” tour this May in Australia!