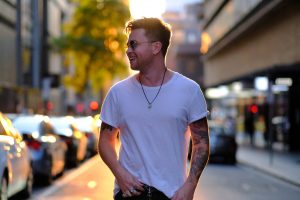 The teenage bad-boy Reece Mastin, who stole hearts across the country back in 2011, is no longer.  In his place stands Mastin, a full-grown man; someone contemplative, and earnest – a man who has already lived a lifetime of peaks and pitfalls, caused in part by the ruthless nature of a career in the commercial music industry.  Now 23 years old, Mastin is ready to show the world who he really is – and what better way to do that than with a brand new sound that is guaranteed to surprise and impress.  Releasing his first single as Mastin today, Not The Man For You is a rock ‘n roll belter and completely unlike anything fans have heard from him before.  To add to the excitement, the debut EP, Suitcase of Stories (available April 6) follows in its wake, a release that truly solidifies Mastin as one of Australia’s most exciting new voices in rock ‘n roll.  To celebrate, Mastin will be taking his band on the road for a sweeping tour of Australia, kicking off in Sydney at The Basement on April 7, then moving through regional and metropolitain cities in Tasmania, New South Wales, South Australia, Queensland, ACT, WA, Victoria and finishing up in Albury on July 14.

Not The Man For You is evocative of the most classic of rock – with Mastin’s vocals having been compared to Australian rock royalty Jimmy Barnes, amongst other greats.  There’s no denying that voice – and when it’s paired with an absolute shredder of a band, spilling over with palpable energy, it’s impossible to resist.  “Not everyone will love this record, and I’m very okay with that,” offers Mastin. “But for those who share the same taste as I do for the grand and world-changing genre of rock n roll, I wanted to make something special and long-lasting.  I wanted to make something that can change your day, change your mindset, and make you feel like you can take on the world.”

The EP Suitcase of Stories could not be further removed from Reece’s previous releases.  Electrified, rumbling and exhilarating, Suitcase of Stories will take the listener on a ride, all right – riff-driven, technically skilfull, and surprisingly diverse for such a rock record.  For all the rowdy guitar and drums though, it is Mastin’s spectacular voice that takes precendence here.  At times soft, but often pushed to the limits, it’s the voice that gives Mastin away: this is who he really is – the five songs that appear on Suitcase of Stories exemplify the most real body of work he’s ever produced.

This new sound has been a long time coming.  From the outside, it might look like he’s already achieved it all – he won X Factor Australia in 2011, released two Platinum #1 albums with three consecutive chart-topping singles.  He continues to travel around the country and the world, performing to thousands of adoring fans every year.  But while Reece is deeply humbled and grateful for his early success in this business, he admits that it came at a cost.  “Giving a 16 year old kid the opportunity to travel the country and play to thousands of screaming fans is obviously a dream come true,” he reflects.  “But, as I learnt, it’s not the reality of this industry.  I was kept at an arms length from all decisions made in my career at that time, and to be honest, I wasn’t thinking about it in the slightest.  I was being a kid and living out my fantasy. When I left behind the big labels and went out by myself, I started to realise the damage that my neglect had done.  I felt utterly exhausted by it all…which has made where I am now all that much sweeter.  I’ve worked my ass off getting back up.  Now I love having the confidence that I know exactly how to run my business.  I’m getting to be really comfortable with the man I have become.”

Going through adolescence, learning about yourself, and becoming who you are are not things that are easily achieved, and much less so when it’s all happening on a global platform.  Mastin has taken it all in his stride, taking mistakes as lessons and continuing to chase his one true passion, his calling, that thing that started it all – music.  “In my opinion the closest things we have to magic in this world are music and love.” says Mastin.  “Taking the path through music that I have has made it hard to let people know the real me.  But, I know that this new record explains who I am as an artist, and where I’m heading.  Music has aways been for me, anyway, and it’s as much about how the music makes you feel as the words that accompany it affect you too.  Marrying the right sound to the stories I have is crucial!”

So what happens next?  Mastin is thrilled to announce the new single and record, and is grateful for his loyal fans for their patience, saying “I can’t wait for people to hear the new music – for my fans that have been waiting so patiently, and music lovers that I’d love to meet through this record.  I can happily say it has been the most enjoyable record I’ve made and it was really nice that through the process I’ll get to introduce the real me.  I  believe this is the beginning of something – I’m not sure where the road will lead, but I know for sure that I am dedicated to walk down it.  I’m not going anywhere anytime soon, rock n roll is not dead, and I’m here to prove it.”

The national tour is set to kick off in April, and, hitting most states in the country in an extensive run of dates, won’t wrap up until mid-July.  Reece is so excited to introduce the new sound to fans on the road, saying “I am always itching with excitement to get out on the boards and play my music, but with this tour there is the added thrill of showing people my new music in a show that I’ve put together myself.  With learning more about myself and what I want to offer musically on the learning curve of the past few years, it has completely changed my approach to how I want to run my show.  I want to create something that will leave my fans in awe and playing it back in their heads when they fall asleep that night.  With the band I have behind me and these new songs that I adore and love to play, I think we can make that dream a reality and I can’t wait to be playing my new music in front of everyone.”

Not The Man For You will be released on March 2.  Suitcase of Stories is out April 6.  Pre-order the EP HERE and score the the single instantly.

Tickes to the Suitcase Of Stories tour are on sale now.