JD Cronise of The Sword 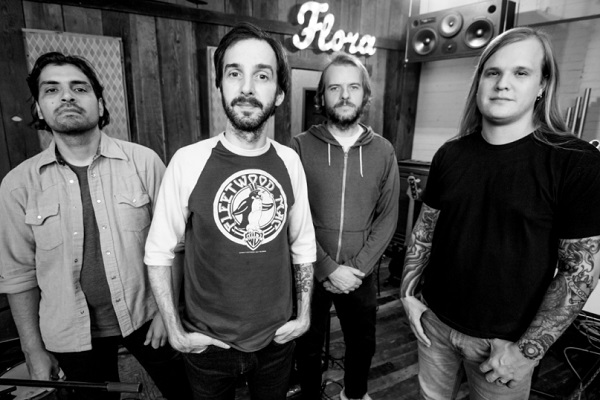 “…I think these days I think I’ve observed a lot more just because time has passed and I’ve had time to do so and I’ve just taken in and studied a lot more music and just the craft of song writing.”

From Release: Even at this point in their career, there can often be difficulty when it comes to describing The Sword, with woefully inadequate terms like “retro” and “stoner” appearing all too frequently. Like all of the band’s work before it, Used Future transcends such diminishing labels. This is 21st century rock n’ roll in the tradition of the 20th century masters, imbued with a unique sound and vision – a bright spot in the modern musical landscape. Put simply, it’s the sound of a seasoned band at the top of their game, the most recent incarnation of the ever-evolving musical entity known as The Sword.

While at home we gave JD a call to talk about The Sword’s new album ‘Used Future’, song writing, touring, vinyl, advice, and much more.

‘Used Future’ is being released later this month, what are your feelings like leading up to release day?
Kind of the usual pre album tension a little bit, not too much but it’s really just wanting to get it out there and get on the road and play music for people.

In the three years since ‘High Country’ what if anything did you do differently this time around for this new album?
I think some of the writing style was a little different, we kind of collaborated a little bit more long distance since I don’t live in Austin, I mean I didn’t live there when we made ‘High Country’ either, but a lot of ‘High Country’ I wrote on my own and the other guys contributed their own pieces. This one we kind of collaborated on a little bit more I guess even though we don’t live together we have the internet sending parts and tracks back and forth. So that was something we hadn’t really done, we’ve done a little bit of it before but we did that quite a bit for this one.

The album just has such a groove about it and feels like a classic rock record, the jams stand out, did you guys just get in there and play and press stop when it felt right on some tracks?
Yeah, a little bit, there are definitely a couple of songs, a couple of the instrumentals on the album were sort of born out of rehearsal space jams, and even when we got in the studio not all of the songs were completely fleshed out, some of them were half songs and some were skeletons of songs. So yeah, a lot of it was kind of jammed out in the studio.

How has your approach to song writing evolved over the years?
I’m not sure, I know that it has *laughs* but I think these days I think I’ve observed a lot more just because time has passed and I’ve had time to do so and I’ve just taken in and studied a lot more music and just the craft of song writing. Go over different things when I set out to write a song now like I did back in the early days or even years ago. Just a matter of refining and evolving your craft and maturing I guess.

Do you ever go back and listen to your first record and think what you could’ve done differently now?
Oh absolutely, for the most part when I do occasionally go back and revisit old stuff I’m usually pleasantly impressed and like “oh that’s pretty cool, that’s good” and tall those little parts that I’m embarrassed about I know very well by this point but there’s not too many of them. With most stuff at the time that’s what I meant to do even if it’s not what I would do now.

So sometimes it can be easy to say what’s changed over time within a band, but what would you say is the one thing that’s stayed the same in your time with The Sword?
Kyle’s hair *laughs* it was a little shorter in the early days but it’s been the way it is now for a very long time I’d say that’s the constant. He’s the guy in the band that gets recognised the most, I’m speaking of our guitarist Kyle because he is the only one who’s hair length never changes, sometimes some of us might have a beard or a moustache, or long hair or short hair, something so people are never sure but Kyle 100% all of the time. To explain on that not just Kyle’s hair, sort of our relationship to each other is kind of the constant, even though we don’t really hang out in our off time like we did in the early days when we do get together it’s always the same as it ever was.

Was there one piece of advice you were given when you started making music that you still go back to to this day?
Piece of advice that I was given? Hmm… good question, I don’t know that too many people were giving me advice is the think. Yeah there were some pieces of advice I was given and totally ignored or decided that I knew better. Yeah that’s a good question, I can’t think of one off the top of my head honestly. The thing that comes to mind was Mark Morton from Lamb of God telling me that I need to stand in the centre of the stage because back in the early days I stood to the side, and he said “you’re the lead singer you need to stand in the centre” and I did that for years and years and years and years and just recently in the past couple of years I’ve become very uncomfortable with that and I’ve gone back to being on the side of the stage but I finally figured I’ve been doing this long enough that I’ve gotten to the point where it’s OK to ignore Mark Morton’s advice. I have great respect for him don’t get me wrong and for the kind of band that he has they need a guy in the middle kind of controlling the chaos and that sort of thing, that’s their shtick. For us it’s more about just watching us jam, I’m not up there to be some sort of ring master or anything like that.

This is the kind of record that needs to be heard on vinyl, of which you’re releasing it on, but vinyl has had a huge resurgence, what are your thoughts on the current vinyl revolution?
I have no problem with it whatsoever, it’s something that I’m mildly surprised about and I didn’t think it would get to this point and sustaining itself for this long and not really show many signs of leaving. It’s cool, from a practical standpoint it is actually a pretty good medium for storing music as long as you treat the records nicely. I’m a very visually oriented person and I love artwork and album artwork and it’s obviously the best format to view an album cover n because it’s the biggest and most tactile so yeah I think it’s great.

In terms of touring what does 2018 have in store for the band?
Well the spring we’ll be touring the States pretty heavily, I think we’re even going to continue that into the summer a little bit. We’re trying to get down under maybe in the second half of the year at some point but we’re not sure just yet.

Of course you have been down here a couple of times, what are your thoughts on Australia, you love coming down here?
Oh yeah, absolutely, what’s not to love.

Lastly let’s look ahead to the future, finish this sentence for me, by the end of 2018 The Sword will…
Have played a bunch of shows *laughs*. That’s all I can hope for; I don’t want to jinx anything. I will have seen a few faces and rocked them all.

Bon Jovi reference, nice!
Not a million, but just a few. *laughs*