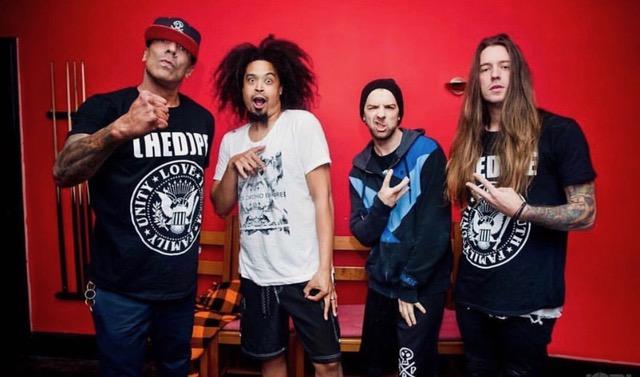 “I can’t just say whatever pops into my head these days because I have a ten year old son and it really does affect me. When there probably was a time I would write or sing anything just to shock people now I would not take that path artistically.”

From Release: Fusing rock, punk, rasta, gansta rap and soul into something truly unique (and affectionately known as G-Punk), (hed) p.e. have been a mainstay in the rock and metal community since forming in 1994. Over the course of their ten albums the band have continuously attempted to bring down the New World Order and the global elite via their socially aware and enlighten lyrics. Bringing attention to the evils that go on around us and control our lives. In 2018 this is more relevant than ever! (hed) p.e. are the voice for a movement that empowers youth and explores secret world history, and at the same time promotes unity and political activism. Couple that with their poundage riffage, solid grooves and funk infused rhythms, you can dance your ass off while simultaneously tearing down the establishment

In Idaho, we gave Jahred a call to talk about the band’s return to Australia, new music, inspiration, advice, and much more.

You’re heading back to see us in Australia, what can people expect on this run?
A good time, good vibes, punk rock, heavy metal, reggae, hip hop. We have a good time, play about seventy minutes and play good music.

For someone that may not have seen you before what’s the best way you’ve had your show described that would bring someone out to come and check you out?
Let’s see, the show has been described as good times, good music and good vibes because that is really what the energy is at the show.

Bring to Australia a number of times do you have a stand out memory from a previous tour here?
Yeah, we did a tour with Cottonmouth Kings like ten years ago that sticks out in my mind because I was filming for a (hed) p.e. DVD I made and a lot of the footage made it on to the DVD and there were some pictures and some packaging, so that one sticks out in my mind.

As the world continues to change and inspiration comes from everywhere how if in any way does the way you write songs adapt to these changing environments?
*laughs* Well that’s a great question; you know I’ve been doing it for so long, right? I probably came out to Australia for the first time almost twenty years ago and so then at that time I got signed in the 90’s for the first time and now it’s 2018 so Jesus Christ… there’s been so many different changes gone on in the world and in my personal life so that always informs what I’m doing creatively, especially from a lyrical stand point you know? My taste in music has changed obviously since 1994 right, but lyrically the inspiration is different and a little more discerning at this point in the path down the road. I can’t just say whatever pops into my head these days because I have a ten year old son and it really does affect me. When there probably was a time I would write or sing anything just to shock people now I would not take that path artistically.

It’s been two years since ‘Forever!’ Can we expect something new soon from the band?
Yeah we’re working on stuff right now really. I’m trying to get stuff done by the end of this summer, hopefully by July.

You’ve been releasing music now for well over two decades. What keeps you going?
Dude, it’s a challenge and a passion at the same time and then there’s the selfish reasons of it’s a good living, I mean have to be gone too much because I’m a glorified club band so I have to play a lot of club shows to fuel a middle class life for my wife and son, right? Then again, music and the lifestyle behind a music career is kind of an addictive lifestyle and I’ve been doing it twenty odd years now professionally since I’ve had a real job so it’s like the motivation is there. Again at this point it’s challenging but it is just a blessing to do music because music is just fun and it’s healthy to perform and to create.

So it’s sometimes easy to say what’s changed in your time in a band but what would you say is the one thing that’s stayed the same in your time in (hed) p.e.?
*laughs* That’s a good question, oh wow, what’s stayed the same? Oh Jesus… some of the answers I’m thinking of are too embarrassing to really be honest about, but what’s stayed the same though *laughs* is *pauses* it just seems like the perpetual chasing the dream, I don’t want to say the dream but just chasing the goal of financial security in this business has stayed the same, that’s gone on forever and it’s a constant hustle you know what I’m saying? Most people live that way. There are very few people who somehow have everything taken care for them to where they’re not thinking about paying bills or they’re just so successful that they’re not that concerned. *laughs*

Was there one piece of advice you were given when you started in the business that you could pass on to someone now?
Wow, you know, a piece of advice is that once you do make any money to really spend it wisely, and have a good lawyer and just keep an eye on your money and where it’s being spent and where it’s going and all that, you know? It’s just part of the whole thing is that’s a business too, and at the beginning of my career I wasn’t concerned about it enough. It’s all good, you live and learn.

Lastly let’s look ahead to the future, so finish this sentence for me. By the end of 2018 (hed) p.e. want to…
Have a new record out. That’s the goal for me *laughs*. 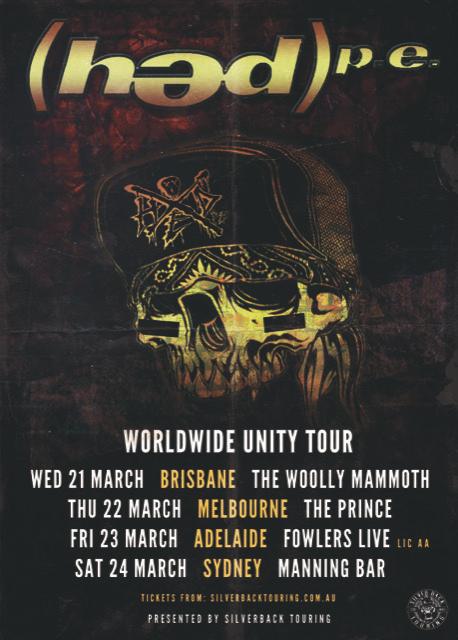