Los Angeles rock and rollers the Bulletboys will tour Australia for the very first time this May!

Emerging from the LA glam rock scene at its zenith with more blues licks than lipstick, Bulletboys have been a mainstay of the rock scene for the past 30 years. Formed by frontman Marq Torien after stints in King Kobra and a then unsigned Ratt, Bulletboys hit the ground running with their Platinum selling 1988 self titled debut which featured the now seminal classics Smooth Up In Ya, Hard As A Rock, and their rocking cover of For The Love Of Money.

While being part of the scene, it was Torien that set the band apart from the pack, with vocals and showmanship that drew comparisons to everyone from David Lee Roth through to Terence Trent Darby. Throughout their three decade career, Bulletboys have released 11 studio albums, evolving with the times whilst maintaining that hard rock edge that brought them to the forefront in the late ’80s.

Album number twelve, From Out Of The Skies will be released in 2018 and will finally see the band play to their long waiting Australian fans!
Marq and the ‘boys invite you to come and experience one of the most consistent and rockin’ live bands up close and personal for the first time on Australian shores this May! 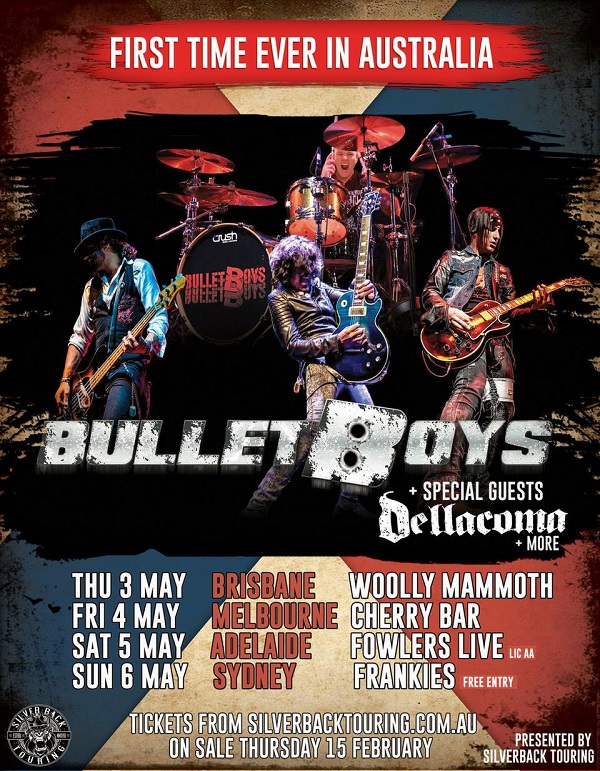