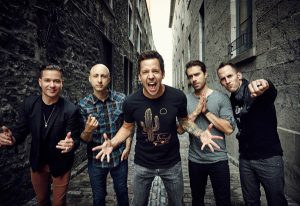 Opening to rave reviews across North America, the No Pads, No Helmets… Just Balls 15thAnniversary Tour is a killer night chock-a-block full of Simple Plan’s pop-punk classics, and now Australian fans get their one and only chance to hear the album in its entirety!

In a statement, the band said that, “After releasing our 5th album last year and playing more than 100 shows in over 40 countries, we felt it was important take this opportunity to look back and celebrate the amazing adventure we’ve had as a band and as friends. It felt important to do something special, something we’ve never done before to mark this landmark in our lives. This is why we wanted to do this tour.”

And the reviews are flooding in from the band’s North American shows, with Canadian Beatsexclaiming it was “a truly epic performance by a group of pop-punk icons…a party that wouldn’t stop!” and Billboard stating “Everyone in the audience knew every single word, screaming them out almost as loudly as the band was playing.”

US pop-punkers REAL FRIENDS will join Simple Plan on their East Coast dates. Real Friends have proved they are more than capable of writing next-level pop-punk and pushing the envelope in a genre that’s continued to decline in creativity and sheer consistency of output in recent years. It’s proof they are proudly carrying the pop-punk torch in 2018 and beyond and “cements Real Friends’ place as new-school pop punk’s lead dogs” – Alternative Press.

Led by frontwoman Caitlin Henry, local rockers EAT YOUR HEART OUT will kick things off with their grungy pastiche of emo energy, punk power and pop palatability. Having recently signed a worldwide deal with Fearless Records the future is blazingly bright for the Newcastle five-piece.

With a slew of awards a mile long and over 10 million album sales globally, this is going to be a MUST SEE for any Simple Plan fan. Rolling Stone recently named No Pads, No Helmets… Just Balls in their Top 50 Greatest Pop Punk albums of all time and with tickets on sale Wednesday 17th January they are sure to go quick!

With Special Guests Real Friends + Eat Your Heart Out*