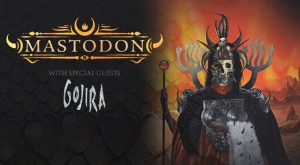 Since forming back in 2000, the mighty MASTODON have certainly made the most of their time. Performing everywhere from Coachella and Bonnaroo to Download and Sonisphere and nearly every major festival in between, they’ve headlined legendary venues such as Red Rocks and sold out shows around the globe. Their epic sets of cerebral metal casting dark shadows over pop culture, bridging the gap between hard rock and mainstream, thanks to their progressive instrumentation and multi vocalist delivery. Mastodon received ‘Best Hard Rock/Metal Performance’ GRAMMY® Award nominations in 2007, 2014 and again in 2015 and landed like a nuke on the set of Jimmy Kimmel Live for a performance earlier this year! These Atlanta natives are the cool kids of metal; fans adore them, critics applauded them and their musical peers wanna be them!

Tickets for both headline shows go on sale at 10am Friday, January 19.

My Live Nation members can be among the first to secure tickets during the pre-sale beginning Wednesday 10am January 17 until Friday 9am January 19.

Musically, French quartet GOJIRA gracefully swing between quaking and quivering guitars, mind-bending percussion, chillingly elegant melodies, and cosmic atmospherics. The band has always dealt in extremes, uncovering light in darkness and finding beauty in heaviness. Since their 1996 beginnings they have made their mark as one of the paramount metals bands of this generation.

TICKETS ON SALE
10AM FRIDAY JANUARY 19

My Live Nation pre-sale:
Wednesday 10am January 17 until Friday 9am January 19