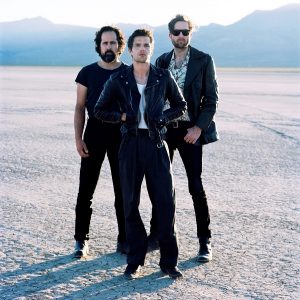 Due to overwhelming demand from fans down south, Frontier Touring are thrilled to announce The Killers are heading to Adelaide to play at the Adelaide Entertainment Centre on Tuesday 8 May as part of their epic Australian and New Zealand tour.

Additionally, with two Melbourne shows already sold out, a third and final concert will take place on Sunday 6 May at Hisense Arena.

Touring in support of their fifth studio album Wonderful Wonderful (out now through Island Records/Universal Music Australia), The Killers will visit Auckland, Wellington and Christchurch before heading to Australia to perform in Brisbane, Sydney, Perth and Melbourne; with the tour now concluding at Adelaide Entertainment Centre on Sunday 8 May.

With an unbelievable number of hits such as ‘Mr. Brightside’, ‘Somebody Told Me’, ‘When You Were Young’, ‘Human’, ‘Read My Mind’ and new tracks ‘The Man’, ‘Run For Cover’, ‘Some Kind Of Love’ and title track ‘Wonderful Wonderful’, fans are guaranteed a good time.

Tickets to both new shows will go on sale Monday 27 November, with a Frontier member’s pre-sale beginning on Thursday 23 November. As one of the world’s most popular rock bands, these shows are not to be missed. Secure tickets now to avoid missing out!

Friday 4 May
Hisense Arena | Melbourne, VIC
All Ages | SOLD OUT

Saturday 5 May
Hisense Arena | Melbourne, VIC
All Ages | SOLD OUT