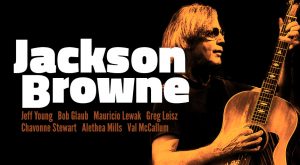 Jackson Browne has written some of the most literate and moving songs in popular music including Running on Empty, Take It Easy, Somebody’s Baby, These Days, Lawyers in Love, For a Rocker, Doctor My Eyes and The Pretender and was inducted into the Rock and Roll Hall of Fame in 2004 and the Songwriter’s Hall of Fame in 2007.

Tickets for all headline shows will go on sale at 10am (local time) on Friday December 1. Tickets for the Bluesfest and Leeuwin Estate winery performances are already on sale.

My Live Nation members can secure tickets first during the pre-sale beginning at 2pm on Wednesday November 29.

Browne defines a genre of songwriting charged with honesty, emotion and personal politics and is known for his advocacy on behalf of the environment, human rights and arts education.

Testament to Browne’s enduring popularity and affection for Australia, where he first toured in 1977, this is his 7th tour here since 2001.

Headline shows in Sydney, Melbourne, Adelaide and Canberra will supplement the already-announced performances at Bluesfest and at Leeuwin Estate Winery in Margaret River, Western Australia.

Jackson Browne’s debut album was released in 1972 on David Geffen’s Asylum Records and since then Browne has released fourteen studio albums and four live albums.

His most recent studio album, Standing In The Breach is a collection of ten deeply personal and political songs, exploring love, hope and defiance in the face of the advancing uncertainties of modern life.

Browne is a co-founder of the groups Musicians United for Safe Energy (MUSE) and Nukefree.org and a member of the Ocean Advocacy group, Ocean Elders.

In 2002, Browne was the fourth recipient of the John Steinbeck Award, given to artists whose works exemplify the environmental and social values that were essential to the great California-born author. He has received Duke University’s LEAF award for Lifetime Environmental Achievement in the Fine Arts and both the Chapin-World Hunger Year and NARM Harry Chapin Humanitarian Awards. In 2004, he was given an honorary Doctorate of Music by Occidental College in Los Angeles, for “a remarkable musical career that has successfully combined an intensely personal artistry with a broader vision of social justice.”

TICKETS ON SALE
10AM FRIDAY DECEMBER 1