EUROPE To Tour Australia For The First Time Ever – May 2018! 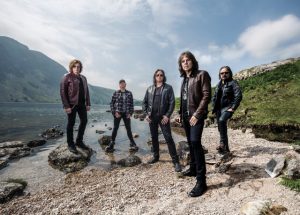 Sweden’s legendary hard rock band EUROPE, best known for their worldwide 1986 Smash Hit The Final Countdown, have announced a run of five Australian dates in May 2018.
This will be the first time the band has toured Australia in their 35 year career!

The band recently entered the famed Abbey Road Studio’s in London to record their 11th Studio album entitled Walk The Earth, with grammy award winning producer Dave Cobb. An album retaining the classic Europe melodies while pushing the boundaries of experimentation – recorded with equipment used by The Beatles and Pink Floyd at Abbey Road,  Walk The Earth was released worldwide on October 20, 2017

Europe have achieved total worldwide sales in excess of 25 million, with the 1986 mega-hit The Final Countdown reaching No1 in 25 countries.

The band’s live set will feature all their hits together with fan’s favourites from their studio albums.

On touring Australia Joey Tempest adds “We are so excited to be touring Australia for the first time! It’s something we always wanted to do, but we just couldn’t make the schedules work before. But now…its going to happen and we can finally hook up with our friends down under!”

Originally formed in 1979 in a small suburb on the outskirts of Stockholm, heavily influenced by British rock giants such as Thin Lizzy, UFO, Led Zeppelin and Deep Purple, the band began to formulate their own sound.

After winning a rock band competition in 1982, where first prize was a recording contract and with a name change to Europe, the world was soon at their feet.  After the release of their first album, the self titled Europe in 1983, the band signed with Sony Epic Records, New York and in 1984 their second album Wings Of Tomorrow set the path for future worldwide success. With their aforementioned third release, The Final Countdown, the band had arrived.

That album spent 70 weeks in the US Billboard top 100 and produced four top 40 singles. With continued touring and sell out concerts all over the world the band released two more albums, 1988’s Out Of This World and 1991’s Prisoners In Paradise, but after 10 years of solid recording and touring and the changing music scene that put “Classic Hard Rock” on the back burner the band decided to take a break.

After enjoying the 90’s releasing solo albums and touring in other constellations, in 2004 the band met up again after realising their journey was no where near complete. The original line up reformed and released album number six Start From The Dark the same year. The band retained the old fans and at the same time regaining new ones. The coming years saw constant touring with headline festival appearances together with vast critical acclaim for their new album releases – Secret Society in 2006, Last Look At Eden in 2009 and Bag Of Bones in 2012.

2015 saw the release of War Of Kings which was later awarded a prestigious Classic Rock Award in the UK. This record put the band back at the top of their game.  The album’s success saw the band tour the USA twice, the first time the band had been there in 10 years, together with other territories, some brand new and some back for the first time since the 80’s.

2016 saw the 30th Anniversary of The Final Countdown and to celebrate the band played a series of special SOLD OUT concerts around Europe where they played the album in it’s entirety for the first time ever, with the London Roundhouse concert being filmed and recorded for the DVD / Audio CD release, which hit the shops in July.
TOUR DATES
Wednesday, May 16: Concert Hall, Perth
Friday, May 18: Thebarton Theatre, Adelaide
Saturday, May 19: Palais Theatre, Melbourne
Tuesday, May 22: Enmore Theatre, Sydney **

Wednesday, May 23: The Tivoli, Brisbane 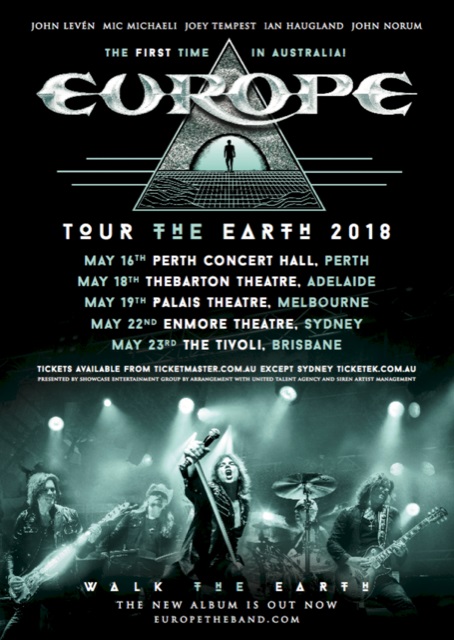