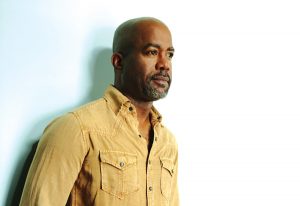 Multiple Grammy Award-winning singer-songwriter, DARIUS RUCKER, today announces that he will play his first ever Australian headline dates this March. On his anticipated tour run, Rucker will be joined by one of US country’s most exciting up-and-comers, the dynamic LUKE COMBS.

Together, they will take in Melbourne’s Forum on Monday 19th March, followed by Sydney’s Enmore Theatre on Wednesday 21st March, adding to already-announced appearances at 2018’s epic CMC Rocks QLD festival across the weekend of Thursday 15th – Sunday 18th March.

The announcement comes just weeks after CMC Rocks QLD’s 2018 event completely sold out within an hour of going on sale, and will be the only chance for fans to catch these world-class artists in action.

First attaining international acclaim as the lead singer of Grammy-winning outfit Hootie & The Blowfish before embarking on a solo career in 2008, Darius Rucker has over the past nine years amassed a total of eight #1 Billboard Country Singles including ‘Homegrown Honey’, co-written with label-mate Charles Kelley (Lady Antebellum), ‘Come Back Song’ and ‘If I Told You’, the lead single from his latest album.

The platinum-selling star has performed with Adele, Lionel Richie, John Mellencamp and more, was invited to become a member of the prestigious Grand Ole Opry in 2012, and recently launched his own sports talk show On Par With Darius Rucker, on SiriusXM.

On his first ever Australian visit, LUKE COMBS will bring the songs from his celebrated debut album This One’s For You to local audiences. Heralded as “a dynamic debut album” (Entertainment Weekly) and “one of the most anticipated albums of the year” (Rolling Stone), the record topped the Billboard Country Album chart on release and hit No.5 on the Billboard Top 200 chart.

Featuring the country airplay chart-topper and platinum smash hit ‘Hurricane’, which has amassed over 100 million streams, and follow-up single ‘When It Rains It Pours’, Combs’ debut 12-track offering is gaining him fans the world over. He has been nominated for New Artist of the Year at this month’s CMA Awards, and is one of the most exciting rising stars on the country music scene.

Combs recently joined Brantley Gilbert on his cross-country US Devil Don’t Sleep Tour, and has taken the stage at some of America’s largest summer festivals including Bonnaroo, Stagecoach and Tortuga. With gritty, grizzled vocals, brazen songwriting talent and one hell of a live show, you can bet he’ll convert a legion of new fans on arrival in Australia next year.

Country music fans, don’t miss your chance to catch these remarkable artists performing at stunning theatre venues, on their only Australian headline shows next year!