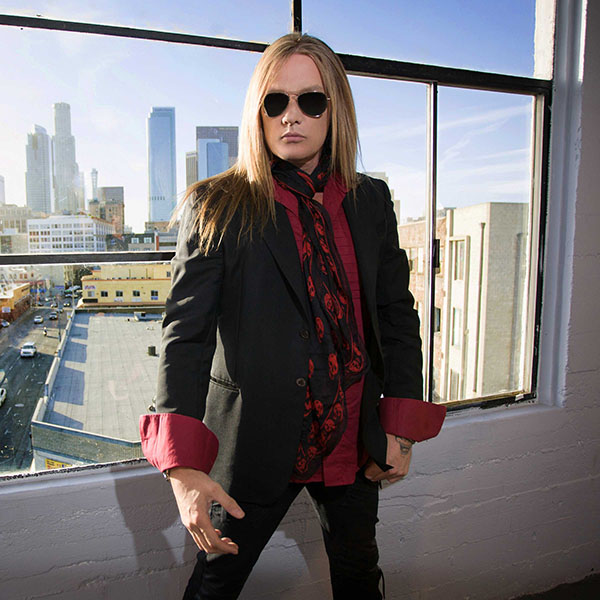 “You know if your purpose or your goal is just to pretend you’re a teenager the rest of your career then your career is not going to be interesting, it’s going to be boring.”

From release: The Original Voice of SKID ROW, Musical Royalty SEBASTIAN BACH returns to Australia this October! Hailed as one of the finest front men to come out of the late 80’s / early 90’s with one hell of a voice, he is the personification of pure rock and roll at its finest! Having joined SKID ROW at the ripe young age of 18, BACH began a whirlwind career fuelled with sex, drugs and rock and roll alongside large amounts of touring and Gold & Platinum accolades. In 1996 when he ventured off on his own where he created acclaimed solo material and his various collaborations with musicians across all genres. Last year he released his book “18 And Life on Skid Row”, an exhilarating, whip-smart and brutally honest memoir.

In California, we gave Sebastian a call to talk about his return to Australia, his book, ballads, new music, Marvel, and just who would play him in a movie about his life…

It’s been two years since we sat down for a chat, so let’s catch up how have the last two years been for you?
Well, I put out my book which was four years in the making and I’m proud to say that it was released in Australia as well, ’18 and Life on Skid Row’. I’ve done lots of touring and I got married again and now I’m ready to do another record, so I’m still touring all the time, we do Singapore on October 18th, then we do Australia, then we start in America on November 4th and we’re looking at a five week American tour. So there’s always touring, but in the meantime I’m working on my new record and my ‘paperBach’ the ‘paperBach’ edition of my book will include more bonus photos never before seen that were not in the hardcover, so that’s exactly what I’m doing. *laughs*

Of course we’re here because you’re headed back to see us in Australia, how are you shaping up the shows this time around?
I played Australia many, many times and it’s one of my bet countries to play, for decades I’ve found it impossible to find another song that would open the show like ‘Slave To The Grind’ but I did it so many times that I got tired of always playing that first, so I do the show a little bit different these days, I come out and do some of the more ballad songs first which is kind of weird but it’s way better musically and then we put the hammer down after a couple of tunes and I think, I don’t know, my fans if they’ve been following me since the beginning we’re all getting older, it’s no secret and what I see by doing the shows this way is to not come out and just beat the hell out of everybody with the volume from the get go I find it makes it a more pleasurable experience for me too. I can’t handle my ears like the volume that I used to crank the music at, like it’s different playing in an arena or a stadium where you can turn it down, but when you’re in a smaller venue and you’re like one foot away from the drums you’ve gotta figure out how to do it *laughs* that’s reality.

As a big fan of ballads that makes me happy so if you want to play them all that would be great.
Well the fans love them, they like when I come out there to sing to the best of my ability instead of run around and go crazy, this is why I’m still touring I think. You know if your purpose or your goal is just to pretend you’re a teenager the rest of your career then your career is not going to be interesting, it’s going to be boring. Like I’m a huge Rush fan and Rush they change their sound and they change their vibe from record to record but they’re always Rush and I find that’s interesting, I like that approach doing something different and not doing the same thing all the time.

You recently released your book ’18 and Life on Skid Row’ what was the biggest challenge in writing it for you?
Remembering everything in detail because the times I was writing about were obviously before the internet existed so I couldn’t like you know, I didn’t have records really, I had to remember all of that stuff *laughs* so I would have to have complete silence, kick my kids out of the house *laughs* and it’s like I can’t do it if there’s noise, I have to really reach back into the memory banks so that was a challenge. Also just the size of a book is a challenge, 450 pages is a lot of words to get right you know what I’m saying? It’s hours and hours and weeks and months and years of sitting in front of your computer and just staring at the screen trying to make something that somebody would want to read *laughs*. The reaction to the book has been far better than I could ever have imagined, the sales are incredible and it’s been released in a bunch of countries and been translated into Portuguese to be put out in Brazil which is crazy and Sweden and Finland so it’s pretty amazing. I’ve never been able to speak Portuguese to my fans in Brazil but they’re going to translate my book *laughs* so it’s gonna be like the whole country is gonna learn about me like they never did before because it’s in their language, so that’s pretty mind blowing.

A lot of books and biographies get made into movies, now you can’t play yourself but who would you choose to play you in the movie version of ’18 and Life on Skid Row’?
I would have to say Chris Hemsworth only if he has the Thor hairdo *laughs*. That’s pretty good right there, that’s good.

You talked about new music before, it’s been a few years since ‘Give ‘Em Hell’, so what are the plans for new music soon?
We are currently in the demo material, song writing, gathering part of making a record. My manager Rick Sales has said “Sebastian, now is the time” and he has many different record labels that he is speaking to, so that’s what I’m doing and I’m not in a hurry or in a rush I feel that I’ve put out a lot of good albums in my solo career and I think they’re all heavy metal records it’s safe to say; ‘Angel Down’, ‘Kicking and Screaming’, ‘Give ‘Em Hell’, not to mention ‘ABachalypse Now’ and ‘Bring ‘Em Bach Alive’ *laughs* I’ve released a lot, so my next record is gonna be a different direction, more vocal oriented, I want to make a California record like The Doors did, and Van Halen did, and The Eagles did, and Motley Crue, they’re all LA bands, I want to make a Sebastian LA record that’s what I’m trying to do.

Around thirty years into your career now, is there one piece of advice you can give us that has stuck with you throughout your time making music?
Well I would say the one thing I didn’t realise when I was young that getting married is like a legal binding, money contract thing, I had no idea when I was young and I wish I never got married so young because it’s been completely miserable *laughs* and any guy that’s been through a divorce knows what I’m saying, That would be my advice, but the second time’s been great but the first was the worst thing that I ever did.

Obviously over time many things can change but what is the one thing that you’d say has stayed the same in your time making music?
For some reason I’m very proud about this, but my fans have stuck with me throughout my career even without Skid Row which is very rare in the industry, but every time I walk on stage what is immediately apparent is that everybody there is smiling and happy and having a fun, good time. I never try to be funny but evidently my sense of humour translates to the fans and it’s not just the music part of it, I joke with them and I talk to them and everybody’s just having fun. That’s the thing that’s not changed, it’s always been smiles and fun like from the first days of Skid Row that we represent fun and good times and not doom and gloom and suicide and stuff that other kinds of music are about, we’re not about that, we’re about having a great fuckin’ time, having fun, forgetting about all the rotten shit that’s going on in the world, like that’s what Rock and Roll is about to me and that will never change.

You’ve covered a number of different entertainment fields, singer, actor, theatre, obviously now including author, is there anything in the entertainment field you’d love to do that you haven’t yet had the chance to do?
Yeah that’s an easy answer, I would love to do anything Marvel, I’ve never done anything to do with marvel comics but ironically right before Skid Row broke up in 1996, in ’95 or ’94 Marvel comics had contacted Skid Row to do a Skid Row comic and it never happened. That was the closest I got to working with Marvel, but I would love to do any of the movies like Thor, make an appearance, like Iron-Man, Spider-Man, The Incredible Hulk that’s my favourite, anything to do with Marvel I would be so passionate and I would be very good at it because I love Marvel and I have since I was a kid so that would be really cool.

Lastly let’s look ahead to the future, so finish this sentence for me, by the end of 2017 Sebastian Bach will?
Well isn’t that like two months from now? *laughs* By the end of 2017 I will be well on my way to making a new record and I’m not just putting out a CD or a file into the air, I’m making a vinyl record and you’ll be able to get it in other formats, but I will not sign with any record company that does not put my record out on vinyl, so that’s a deal breaker.