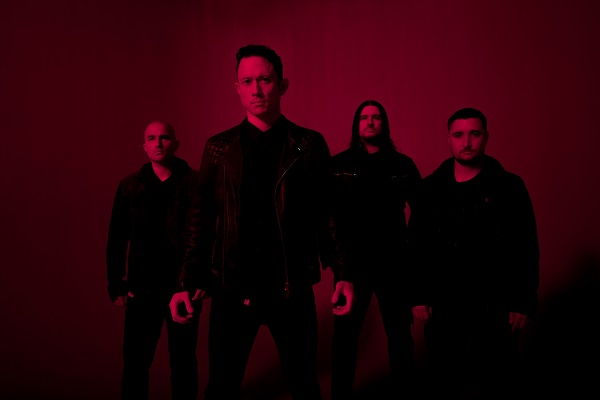 From release: Trivium catapulted into the first ranks of modern metal with 2004’s Roadrunner debut, Ascendancy which was named “Album of the Year” by Kerrang! 2006’s The Crusade incorporated new melodic colours into the band’s sound, resulting in widespread critical applause. Shogun followed two years later and received even greater acclaim and chart success. In Waves hit then two years later Vengeance Falls arrived, just two years ago, Trivium made a stunning impact with Silence In The Snow, marking Trivium’s fourth consecutive Top 10 debut in Australia. Now Trivium has unveiled details of their new album, THE SIN AND THE SENTENCE out October 20

At home in South Florida enjoying a break before a tour, we caught up with Paolo from Trivium to talk about the band’s new album ‘The Sin and The Sentence’, new blood, touring, advice, aspirations, and more.

It’s been about two years since we last chatted, so let’s catch up, how have the last two years been for you?
It’s been great, eventful which is normal for us *laughs* between the touring and sort of at the last minute of last year having to make the switch and getting Alex into the band I mean that was sort of the culmination of the year but the last record we had some really awesome success in America especially with rock radio and ‘Until The World Goes Cold’ became probably our biggest single to date, so that was like a really a great thing to happen, then getting Alex in the band was probably even much better because it lead to where we are right now with this record and we’ve just very excited for getting out and just getting the music out there. I keep listening to it over and over and I forget that no one else has heard it yet besides us and some press but we’re stoked for it.

I was going to ask about that, what are the feelings like for you around album release time?
It’s kind of weird, the few weeks coming up a record I’ve already heard the music so much that it feels like it’s already out, so usually the day it comes out I’m reminded and excited again but like for a couple of weeks before hand, I don’t know, I already know what’s on it but once people that haven’t heard it start hearing it and you start getting reactions back it’s like kind of what feeds into the excitement for us, and once we can play it live. We have had the chance to play one song live when we were in Europe a few weeks ago so that was like really exciting and now it’s died back down again and once we can get back out it will be like super exciting again.

With ‘The Sin and The Sentence’ did you set out to do anything differently this time around compared to your previous releases?
Before we even kind of really got into the music side of it I just had the thought that the writing we had to get back to some ways that we wrote but also I felt like we kind of needed to change up a couple of things and the biggest change that I wanted was that we would start the vocals right when we started the music and we did the writing over two different periods. When Alex came in we wrote six songs, and when we got done with Europe we did the next six songs, and any time we started a song before we left that day we’d started vocals, and some songs had more ready and some didn’t but the thinking behind it for me was that we always do our best when we’re very prepared and that’s just a natural thing for us, but I didn’t want the music to get so far ahead and get so solidified before we had the vocals, so by doing that the vocals were developing beside the music and often times changing the music to fit and be better and to make the song structures better and made us think a lot differently, and it was really an amazing process because I mean we had some really big changes that fundamentally altered where the song went and I think like playing ‘The Sin and the Sentence’ live feels so natural because we have been playing that song for about six months before we played it live and getting out there just felt like such a natural song, the vocals, the riffs, everything, I think a lot of that came down to the way we changed up the writing process a bit and that was just a really big thing for me. I’m always thinking of how to make the process better, how to get into the song better, how can we record faster and more efficient  so that’s always like at thing in the back of my mind, aside from trying to wrote some good riffs and trying to write the lyrics.

You guys love to play a bit of Spinal Tap with your drummers, and this album marks your first with a new drummer, what was it like working in the studio with new blood?
Man, it was really unbelievable, he recorded a lot of the songs in like two takes *laughs* and it was pretty crazy to watch I’ve never seen anything like that, like he did ‘The Sin and the Sentence’ in two takes and the first take is the one that everybody hears on the record because it was better, he’s just that kind of next level playing. He’s 24 but he’s been doing this for a while and also just the day we met him it was like when you know something’s gonna work you just know right away and we’re all at this point kind of been jaded from the whole thing with the drummers and so you don’t want to get ahead of yourself and just go out on tour and see what happens, it just kept getting better and the fit kept getting better and even after the touring we just knew that it was gelling and it was gonna work, and when we got into the studio and it was like we couldn’t have asked for a better drum session, he killed it, he was done in like two and a half days.

So, when do you think we might see you and your new drummer back in Australia?
Nothing officially confirmed but when we have a couple of things planned out next year we’ll know when we can probably, hopefully try to get down and I hope it’s soon because I love coming down there. I always want to stay longer, so maybe this will be the time I can stay after a tour and bounce around and have fun down there because I love coming down there it’s one of my favourite places.

So obviously things change over time, but what would you say is the one thing that’s stayed the same over your time together in Trivium?
I mean I would say the one thing and it’s kind of gotten stronger over time, that Matt, Corey and I always really had each other’s backs and always been able to work out differences, and always working towards the same goal and we always know what we want and we’re working towards that together. It started like that in the beginning but it’s gotten stronger and stronger and I think any time we’ve had to deal with anything it’s made that even stronger of a bond between us and that’s just been a consistent and I think that’s why we love doing this, we love playing, we love recording and all the good stuff that’s happened with the bad has completely outweighed any of the negative stuff and I wouldn’t change that for anything.

Other side of that though, is there one piece of advice you were given when you started in the band that you’ve maintained and stuck with throughout the years that you still go back to?
Hmm… let me think. I remember kind of early on, obviously we know him pretty well now, Rod who manages Iron Maiden, Rod Smallwood, but I remember in the beginning when we first met him through our manager or something and we maybe showed him ‘Ascendency’ or something and we were just talking and he kind of just was like his biggest thing was you always have to be growing, you always have to be looking for new was to make your band not only grow in terms of like tickets and all that but musically and sonically and in every way, and the moment you stop doing that your band starts to kind of shrink and the scope of everything starts to get smaller and smaller and this is coming from a band that is at the top, literally one of the biggest bands of all time, and definitely in our genre. I guess that just inspired us to always be forward thinking and never rest and never think that we’ve gotten to this point and it’s all smooth sailing from here. No, you have to kind of keep fighting and keep pushing your band and I think that mindset and that thing that he gave us then has always come back because any time it felt like we were not doing that you could kind of feel it right away and we’ve corrected course. You keep finding ways to make your band grow you don’t know what it’s gonna be but you’ve gotta get out and figure it out and try things and that was a very inspiring thing to learn and hear from someone who’s been there and done it a million times and that’s definitely stuck with us.

Over your career you’ve done a lot so far but is there anything that tops your list of things to do you haven’t yet had the chance to do?
Let me think here, I mean to be able to play places that don’t get bands often or have never had bands, I mean there’s not a lot of places that are that cut off at this point, but when we’ve gotten to go to places like South Africa or South America for the first time or playing places like Indonesia and The Philippines, any time we can cross off a new place or get back to a place we haven’t been many times I mean that’s always something that we’re looking to do. Hopefully maybe one day we can cross off some festivals that we could headline, that’s one of kind of big swinging for the fences type goals but you never know, you’ve gotta just keep growing and I guess that’s something to look forward to and keep pushing ourselves. Even now when we headline a smaller festival somewhere I’m blown away thinking like wow, this is stuff we were dreaming about ten years ago so who knows where the next ten years will go and just gotta keep making music and coming back and that seems to be the thing that works.

Lastly let’s look ahead to the future, finish this sentence for me, in 2018 Trivium will…
Will definitely get back to Australia *laughs*.