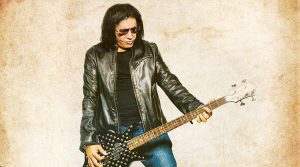 Legendary Rock n’ Roll God Gene Simmons has today announced he will bereturning to Australia with his band to treat the Australian KISS Army to a special run of concerts in February 2018.

Gene’s tour dates will kick off in Adelaide on 1st February at the Entertainment Centre Theatre, followed by Sydney’s Enmore Theatre on 2nd February, Margaret Court Arena in Melbourne on 3rd February and winding up in Brisbane at Tivoli Centre on 6th February.

Having sold more than 100 million albums worldwide with the iconic shock-rockers KISS, Gene Simmons has written and performed some of the most well known anthems in the history of music. His tongue wagging onstage antics and distinguishable makeup often overshadow his grossly underrated musicianship, but it is assured that the Rock ‘N’ Roll Hall of Fame inductee deserves all the accolades he has received throughout his illustrious career.

Tickets for Gene Simmons and his band’s national tour will be on sale Wednesday, October 25th at midday. For ticketing information, please head to www.ticketek.com.au for Adelaide, Melbourne and Sydney shows, and www.ticketmaster.com.au for the Brisbane show.

Gene Simmons can’t wait to return to Australia, saying today, “Doing these smaller concert halls, which hold a thousand to three thousand people, means they get filled up by real diehard fans. They don’t want to hear the same-old, same-old. They want to hear nuggets, as they say. It’s a hoot for me because I’ve never really had a chance to do this stuff live. It’s been a lot of fun.”

With an ever-changing set list from night to night, die-hard fans are in for an absolute treat of unexpected Gene Simmons & KISS gems, the classic hit songs we all know and love & possibly even an influential cover or two for good measure. Focusing heavily on the music and stripping away the stage show for a rare performance, fans have the opportunity to gain a new appreciation for Gene’s song-writing, personality and outstanding performance characteristics whilst hearing songs that have only ever been heard on record.

To commemorate the tour, Gene will release ‘The Vault’, a deeply personal soundtrack to his life, condensed into a 50-year time capsule (1966 – 2016). ‘The Vault’ includes 150 recordings featuring notable rock n roll artists and of course, his bandmates from KISS.

An obsessive music fan and collector himself, Gene has packed ‘The Vault’ with exclusive mementos created specifically for the capsule – a new Gene action figure, an ‘In Gene We Trust’ oversized commemorative coin, a deluxe book featuring over 50,000 words and 160 pages of unseen photos from his personal collection, and a track by track commentary on every song.  He has also hand-picked a personal gift from his own archives.  The best part for fans, is that every ‘The Vault’ purchased comes with a double pass to Gene’s concert in their nearest capital city – and he will hand-deliver ‘The Vault’ personally on this Australian tour!

Fans can purchase ‘The Vault’ HERE.

Current reviews in the US are praising Gene for bringing a loose, fun and yet ferocious show direct to his fans:-

“This is what long-time KISS fans have been waiting for and the time is here.” Backstage Axxess

“Did Gene deliver the goods? You bet your ass he did!”  Mike’s Music & Concerts

“Just 5 guys on stage having a great time. Gene, Ryan, Jeremy, Phil and Brent put on one hell of a show. If this show comes to your town, GO! Gene once again showed the big boys how it’s done.”  Legendary Rock Interviews

“Gene Simmons had several things to prove on this tour.  He is not slowing down, he can rock the house without Paul, and the music of KISS is every bit as bombastic without the bombs as it is with them.  All these things were proven.” Glacially Musical