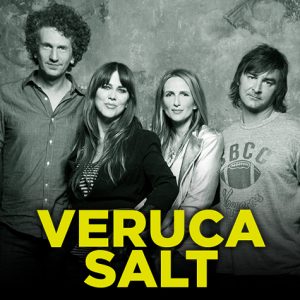 Frontier Touring are thrilled to confirm that alt-rock legends Veruca Salt will perform two special indoor shows in Sydney and Melbourne in March, as well as appearing nationally for the first time ever at a day on the green outdoor shows.

Veruca Salt’s signature hit ‘Seether’ remains one of the most-loved rock tunes of the ’90s. Not surprisingly, the band experienced a meteoric rise, doing everything a young band coming of age in the grunge era could hope for – selling more than a million records, touring with alt-rock royalty Hole and PJ Harvey, and winning critical acclaim for albums like American Thighs (named after an AC/DC lyric).

After breaking up in 1998, the original line-up – Nina Gordon, Louise Post, Jim Shapiro and Steve Lack – re-formed in 2013 and were warmly welcomed back on stage. In 2015 they released their fifth studio album Ghost Notes, the first to feature the band’s original line-up since 1997’s Eight Arms To Hold You:

‘Gordon and Post haven’t missed a beat. In fact, they might be better than ever.’ – NOW Magazine

In the live arena, Veruca Salt’s reputation was made through performances marked by energy, passion and verve – qualities that will once again be on display during this tour. Act quickly to secure your tickets!

General public on sale from 10am AEST, Monday 25 September

A DAY ON THE GREEN SHOWS
The Living End, Spiderbait, Veruca Salt, The Lemonheads, Tumbleweed and
The Fauves

Visit adayonthegreen.com.au for more information on these outdoor shows: