Kellin Quinn of Sleeping With Sirens 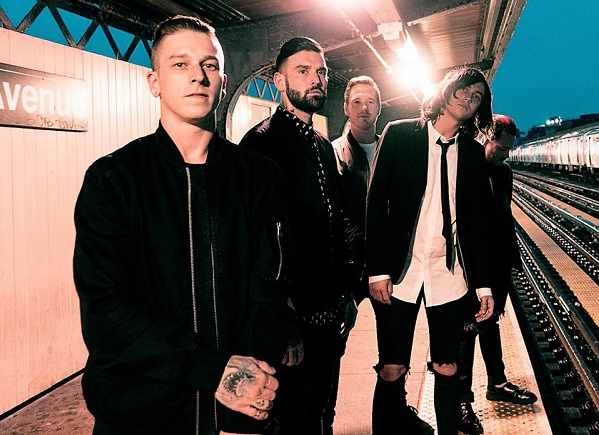 “I try to keep all my music as positive as possible, I feel like the world we live in is very negative so I try to make music that kind of helps you get through the hard parts in your life, and it definitely shows when fans come up and say that our music has helped them get through things in their life.”

From Release: Sleeping With Sirens have emerged as one of the most influential artists in the alternative rock genre, selling an impressive 1.5 million albums worldwide with over 400M + Spotify streams and 350M+ Youtube views. Since the release of their 2010 debut ‘With Ears to See and Eyes to Hear’, the band has quietly pushed the envelope, delivering a delicate one-two punch of towering melodies and tight musicality that has galvanized a diehard fan base dubbed “Strays.” From the #3 debut of 2013’s ‘Feel’ on the Billboard Top 200, to the Top 15 success of 2015 follow-up ‘Madness’, Sleeping With Sirens have earned unanimous acclaim, now the band have released their fifth studio album ‘Gossip’, the album is brimming with catchy riffs, intricate beats, and singer Kellin Quinn’s soul-striking vocals. The 11-track set takes Sleeping with Sirens to a new era in their career, while maintaining the unique spirit that has resonated with millions of listeners since their 2010 debut album.

In New York and getting ready for a sold out show, Kellin gave us a call to talk about the band’s new album ‘Gossip’, label changes, coming back to Australia, and more.

Ok, so ‘Gossip’ is your fifth album, so for something different can you give us five words that sum this album up for people?
I’d say mature, energetic, I’d say *laughs* this is tough. I can’t think of five words!

So, what if anything did you do differently on this record compared to previous releases?
I just really tried to connect with myself and make it personally about me, I feel like the other records they’ve been like taken from the fans and outward experiences but I feel like this record is different.

In the two years since ‘Madness’, inspiration wise what if anything helped to shape what has become ‘Gossip’?
I think just like years of experience, years of being on the road, years of writing, years of meeting our fans, years of having expectations put on me and then you just kind of really honestly, dude, is just not really giving a fuck anymore and trying to live my life in the present and the now, you know? I think you put a lot of pressure on yourself when you’re an artist and you’ve done a certain amount of records that there’s this almost expectation of you and I feel like this record is really kind of me just breaking that and doing whatever I want to do.

This is also your first album with Warner Brothers, what was it like joining a new family for this album?
Warner Brothers is great, they’ve been so amazing through this whole release, they’re really fans of music you know and it’s crazy to think that from a major label because I’ve heard so many horror stories but it’s really been a pleasure working with Warner.

In the seven years since your debut, is there one thing you’ve done or maintained across the album making process for each album?
Yeah man I just try to be myself, I try to keep all my music as positive as possible, I feel like the world we live in is very negative so I try to make music that kind of helps you get through the hard parts in your life, and it definitely shows when fans come up and say that our music has helped them get through things in their life. That’s always just a huge compliment to me just because I relate a lot to them, I don’t see myself as anybody different or better than them on stage, I feel like I’m a part of them, we play concerts and it’s a family so it’s nice to hear that our music is helping them and changing their life.

Obviously over time things change but what would you say is the one thing that’s stayed the same in your time together?
I feel like everybody in our band plays their part, they have their thing that they do to keep the band moving forward and pushing this machine that is Sleeping With Sirens and I feel like every member contributes in a way and we all rely on each other and I think that’s something that’s always been present with us, we’ve always been able to reply on each other to get through anything.

Obvious question, when do you think we’ll see you back in Australia?
*laughs* Very soon, man. We’re planning all that stuff for 2018, we just have to figure out all the routing and everything but you can expect us very, very soon.

What does the rest of the year have in store for you?
Tonnes of touring, dude, we’re gonna be on the road constantly, I think that’s going to be the only thing that’s constant really I’ll see less and less of my home and my family and see more and more of strangers and different countries and I’ll get lots more stamps in my passport. *laughs*