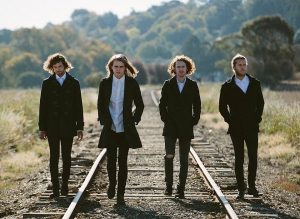 The Getaway Plan will be embarking on a tour performing their critically acclaimed  album, ‘Other Voices, Other Rooms’.  The band’s breakthrough album reached #3 ARIA Australian Album chart and  #1 on the AIR album charts.

Having already sold out Saturday September 9th at The Corner Hotel and announcing a second Melbourne show Sunday September 10th. The Getaway plan have now announced additional shows to be added in both the Central Coast and Canberra “It’s important to us as band that we get to as many corners of the continent as possible, we love playing local shows  and can’t wait to see you soon!” Matthew  The Getaway Plan.

“…the album laden with pop-hooks and slick production, commanding you to pay attention to singer Matthew Wright’s incredible range and melody.”  Sputnik Music

“…it’s evident with the immediate success of their single “Where The City Meets The Sea” that the only way to go is up.” Ultimate guitar

The debut record from The Getaway Plan catapulted them to the forefront of Aussie hard rock and post hardcore scene. Undertaking dozens of tours across the country and internationally. This is the record that made them a household name.

OTHER VOICES, OTHER ROOMS TOUR

Tickets on sale now  via: thegetawayplan.com