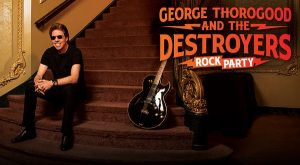 Currently touring extensively through North America, GEORGE THOROGOOD AND THE DESTROYERS will bring their Rock Party Tour to Australia for two shows only this summer.

Tickets for both shows go on sale at 10am Wednesday, September 27.

My Live Nation members can be among the first to secure tickets during the pre-sale commencing at midday Tuesday, September 26.

The band has amassed a catalogue of hits that includes “Who Do You Love,” “I Drink Alone,” “One Bourbon, One Scotch, One Beer,” “Move It On Over,” “Get A Haircut,” and 1982’s anthemic, “Bad To The Bone.”  The band has released 16 studio albums – including six Gold and two Platinum discs on Rounder, EMI and Capitol – but it’s their powerhouse live performances that have made GT&D legendary.

“We play for a different audience every night, and that keeps it fresh. There are people who’ve never seen us before, and we have to impress them. There are fans that keep coming back, and we want to surprise them,” Thorogood said. “This is my job,” he added. “I’ve always loved it, and I love it now more than ever.”

From coast to coast, the critics agree.

“I’m happy to say, after all these years, that George is still ‘Bad To The Bone’ and he’s never let go of the true spirit of rock ’n roll!” L.A. Daily News

“Thorogood is a guitar-blazing revivalist whose enthusiasm and showmanship make the music fresh.” Baltimore Sun

“He’s got charisma and personality to burn, a fact that becomes evident the moment he walks on stage.” Milwaukee Journal Sentinel

This year Thorogood released Party of One, the first solo album of his 40-year-plus career, marking a true back-to-the-roots approach for the singer and guitarist.
TOUR DATES:
THE FORUM, MELBOURNE
MONDAY JANUARY 22

TICKETS ON SALE
10AM WEDNESDAY SEPTEMBER 27