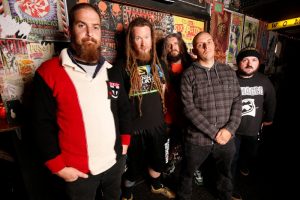 To top it off, the boys are announcing an Australia tour this December. They’ll be bringing Brisbane’s sloom metal kings DISENTOMB along for the ride, along with freshly signed EVP Recordings label mates PAGAN.

King Parrot’s latest venture is ten tracks of blistering uppercuts that will leave you dazzled by the road-side, ravaged and aroused, wondering what the hell just hit you. This new record takes a giant stride forward in songwriting and production values. It mixes the raw fury of debut album Bite Your Head Off and mashes it with the twisted sophistication of their ARIA nominated follow up Dead Set.

Genre elitists will be sitting back stroking their fetid beards in confusion as these handsome bastards dip into their profuse well of influences. Spitting out tracks fused with grind, death and thrash punk chaos, King Parrot bring these putrid diamonds to life as only they can.

Indeed, ugly is the word. Recorded at the infamous Goatsound studios in Melbourne and produced by overlord Jason Fuller, this is no walk in the park on a sunny Sunday afternoon. Ugly Produce is a twisted, cantankerous ride through an outback graveyard, high on pcp, wreaking of animal feculence.

Reading this early gives you an advantage over others. Don’t blow it, get behind this collection of stripped-back, honest to goodness, hard-working extreme metal designed to give you the proverbial kick in the guts you’ve been longing for…