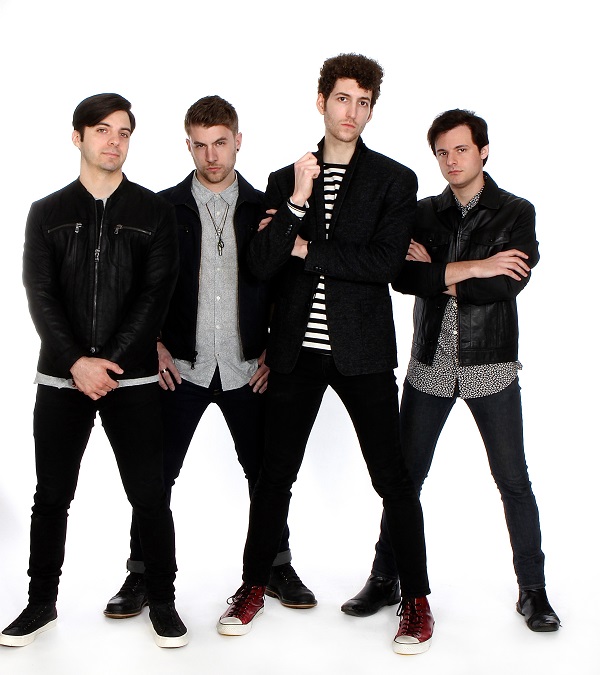 “There’s so much out there now whether it’s trying to be profound or deep or witty to me the stuff that connects with me is the stuff that I believe no matter how simple it is it’s believable, so we just try and play and sing what we love you know and do our best to connect with people and that’s what it’s all about…”

From Release: With the four members of THE DIVES hailing from both sides of the country and the middle, it might seem unlikely that these musicians would ever even meet, let alone form a band – until you hear them play.  After one listen, it’s nearly impossible to imagine them playing with anyone else.  Featuring tight harmonies and infectious hooks, THE DIVES’ music sounds fresh and familiar at the same time.  When explaining how the band was formed, they all vehemently agree that they got together with the common goal of making the kind of music they wish they heard more.

We gave Evan and Sergio from The Dives a call while in New York in the middle of rehearsal and they filled us in on the band, their music, what they’re all about, their mission and we think this sound is rad! So we proclaim The Dives our newest Best Thing You’ve Never Heard!

So for those that may not be aware of The Dives, how would you best describe your music and what you’re all about?
Evan – Well we’re a rock and roll band playing songs we lone and ones you hopefully won’t forget, we’re just trying have a blast and so far we’re doing a pretty good job of it. We just get up on stage and play music with your best friends and there’s nothing better than that.

You have just released your debut EP, when you’re introducing yourselves to the world is it a hard task putting together what will be their first impression of the band?
Evan – No, I mean I think from the very beginning we’ve always had a pretty good idea of who we are, there was never a question as to what we were all about it was just how do we get it across in full force, and really with the EP it sums who we are exactly in twelve minutes, there are no tricks and no gimmicks and it’s basically what you would get at a live show, that’s us.

So instead of giving us a standard review, let’s say if you had to give us your best door to door sales pitch to try and convince someone to listen to it before they slam the door in your face, what do you say to them?
Evan- Well, I’d play it
Sergio – *laughs*
Evan – I’d play you the first thirty seconds of the EP, we worked really hard to make a very concise statement with those four songs and one that doesn’t need any qualifiers or any disclaimers you know? That’s us, and I think the best thing anyone can do to get an idea of who we are is to take a couple of minutes to listen.

In terms of your song writing, what do you consider to be the most important ingredients that make up one of your songs?
Evan – Honesty, I think the best thing you can do is just be honest and that connects with people. There’s so much out there now whether it’s trying to be profound or deep or witty to me the stuff that connects with me is the stuff that I believe no matter how simple it is it’s believable, so we just try and play and sing what we love you know and do our best to connect with people and that’s what it’s all about, whatever art you’re making the idea is to connect with someone and I think you have to do that by being honest and being real.
Sergio – Yeah people can usually sniff out when you’re not being genuine you know? They’re the first to call you out on it, or they just won’t listen.

So what bands did you grow up listening to and how did they help create the style of music that can now be heard throughout your music?
Evan – The Beatles are kind of the big binding agent between us all, we all really got our first taste of music through them but for the most part it’s the great bands that have great songs you know all of us are all about the songs whether it’s The Kinks or The Beatles or The Who, Tom petty you know guys that have songs that really stand the test of time, Led Zeppelin, those guys are really where it’s at for us because they’re all amazing musicians and they were never playing to show you how good they are at guitar or drums, they were playing to get the point of the song across which I think is really worth the time of the listener. I would take a great song over a great band if I had to choose one or the other.

I love the power pop vibe like a Cheap Trick early Marvelous3 type vibe, is that what you listen to now and inspires you to keep doing it?
Evan – We listen to everything, I love Cheap Trick I think we all do, you know I think if you listen to one genre or one band you’re gonna get stale really quickly because you’re just going to end up being sloppy seconds of that band. So I think to make something fresh and something really unique you’ve gotta pull from a lot of different areas, so I don’t think any of us listen to one genre or one time frame too much, it’s just a bit all over the place and I think that’s what really breathes life into something. We’re a rock and roll band, we listen to everything and I think that’s what hopefully people find interesting is they pick up a little bit of this and a little bit of that and we really try and put our own spin on things.

Well when I listened to your EP it stood out as it was really refreshing to hear something that sounds old but sounds new again if you know what I mean?
Sergio – Yeah man thank you we appreciate that.
Evan – Thank you, that’s exactly what we’re trying to do, just do what we love and do it as best as we can.

For a bit of fun, say you get the chance to open for any artist or band in the world, who would they be and why?
Evan – Ooh that’s a tough one.
Sergio – Is it only one?
Yeah, only one.
Evan & Sergio – *laughs*
Evan  – Well that’s a difficult question, unofficially I would say Paul McCartney just because I’d love free tickets to a Paul McCartney show he’s like my hero, but probably, that’s so hard.
Sergio – Yeah, oh man…
Evan – Maybe Arctic Monkeys because I think their fan base is young and very open to new stuff and I think if you them you might also be inclined to like us, they’re a cool band, I think they’ve got great songs and we share an audience there well. So I think being a bit judicious I would pick them but selfishly it would be McCartney.

Other side of that, if you had to pick a song to cover that no one would ever expect from you what would it be?
Sergio – I don’t know if we can answer this *laughs* I’d say we tend to throw something out that’s unexpected, you know at our live shows but that’s a tough one man, this is harder than the one band to tour with.
Evan – I think there’s so many great bands out there at the end of the day there’s nothing that gives us more joy than playing our songs, that’s why we’re really in it to show you who we are. So to choose a cover song is so hard because there are so many great songs but there aren’t any that stand out as absolutely must play song for me. It’s always for me we must play this song that just got finished last night, that’s the reason we write songs and the most important one is the one that just got written.

Obviously you’ve just released an EP but are there plans for more songs and possibly and album to come?
Evan – We’ve got tonnes of material, there’s no shortage in that we’re just trying to continually one up ourselves in terms of songs and in terms of live shows, so right now we’re focusing on playing as much as we can and there’s gonna be a very steady stream of output but in terms of a full length you know we’ll do it when the time is right. Right now we’ve got an EP out that I think we’re all very proud of that really sums up the band and hopefully gets more people out to live shows and we’re just gonna concentrate on that for a little bit.
Sergio – Yeah we’ll concentrate on the EP as it’s a good representation of who we are but you know four songs that shows this is who we are and until then the time will come when an album comes out.

Obviously Evan, being around music your whole life what is the best piece of advice you have been given?
Evan – I mean really there’s no secret to anything you just have to work super hard *laughs* and at best take away is seeing so much of behind the scenes of everything and how much work there’s really no substitute for just a tonne of work, I stayed home from so many parties in high school and left a tonne of parties in college just to work on songs or really hone my craft and I know all the guys have done the same and that’s what we really pride ourselves on is we work non-stop to get better at what we do and to expose more people to what we do. We’re together every day of the week whether it’s a couple of us or all of us just working on songs or harmonies or trying to push stuff and I think that’s really the best thing you can do is just be relentless.
Sergio – Yeah it’s 24/7, the first thing when we wake up in the morning is band related and the last thing that we talk about before the night is done is band related so it’s constant. It never stops but it’s a strong work ethic and you’ve gotta support one another and really, really, really work.

You’ve mentioned playing shows a lot, what are the plans for the rest of the year?
Evan – We’ve got a national tour in August so that will see us through North America which should be really fun and get us through a lot of places that we haven’t had a chance to go yet, and just continue to play a tonne around New York and New Jersey, we’ve got a lot of new stuff we’ve got in the works so we’re looking forward to playing that live and continuing on as we happen. So really the plan is just to keep on going as we’ve been going. Play and play and play.

Lastly, let’s predict the future a little bit. Finish this sentence for me, by the end of 2017 The Dives will…
Evan – Hmm… Be stuck in your head.
Sergio – That’s almost creepy sounding.
Evan – *laughs*