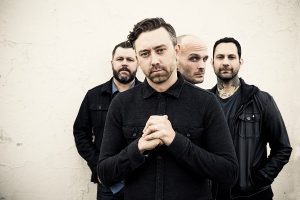 Frontier Touring are thrilled to announce the return of Rise Against to Australia and New Zealand in February 2018. The politically-charged, punk four-piece will play seven shows – their biggest headline shows in our countries to date – in celebration of their chart-topping eighth studio album Wolves (out now via EMI Australia). Joining Rise Against in AU/NZ will be special guests SWMRS.

‘No one can doubt Rise Against’s passion for what they do, and their ability to put on a wild show’ – Reverb Online

‘Wolves is an appealing combination of catchy songs and thoughtful, passionate lyrics’ – Loudwire

‘Rise Against are a band of epic proportions. Seamlessly combining political statements with punk rock that has leant itself to the rare integration into the mainstream acceptance for the past 16 years.’ – Vulture Magazine

Tim McIlrath, Zach Blair, Joe Principe and Brandon Barnes will make their return following a hugely successful run of sold-out shows in December 2015 and an unforgettable stadium tour as Foo Fighters’ special guests. In Australia alone, the band have achieved more than 200,000 album sales, thanks to hits such as ‘I Don’t Want To Be Here Anymore’ and ‘Help Is on the Way’ and albums The Sufferer and the Witness (2006), Appeal To Reason (2008), Endgame(2011), and The Black Market (2014).

Recorded in Nashville with Grammy-winning producer Nick Raskulinecz (Foo Fighters, Alice in Chains, Deftones), Wolvessmashed into the charts upon its release in June: hitting #5 in Australia’s ARIA Albums Chart; #9 in the US Billboard 200 (and a trio of #1 debuts in the ‘Hard Rock Albums’, ‘Rock Albums’ and ‘Top Alternative Albums’ charts), and #20 in New Zealand.

Featuring singles ‘The Violence’ and ‘House On Fire’, the influence of the US presidential election can be heard on Wolves. “In many ways, a Rise Against show is a safe space for our fans,” says McIlrath. “But I realised … I want to create dangerous spaces where misogyny can’t exist, where xenophobia can’t exist. I want to create spaces where those sentiments don’t have any air, and they suffocate: where those ideas die. Wolves isn’t about creating a safe space, it’s about creating a space that’s dangerous for injustice.”

SPECIAL GUESTS FOR ALL SHOWS: SWMRS

Joining Rise Against in AU/NZ will be special guests SWMRS, who released album Drive North in 2016 (via label Fueled By Ramen). The Oakland, CA rock outfit have been pals since childhood, and after tours of the US and Europe in 2017 will head down under on their very first visit to our shores. Drive North was produced by FIDLAR vocalist Zac Carper. Check out the videos for ‘D’You Have A Car?’ here and ‘Palm Trees’ here.

With their visceral live performances, Rise Against are not to be missed!

RISE AGAINST
with special guests
SWMRS