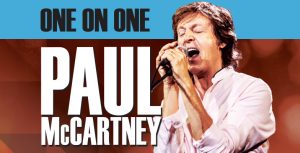 Due to overwhelming demand in the pre-sale, second and final Paul McCartney shows have been added in Melbourne and Sydney!

Returning to Australia for the first time since 1993, enormous demand saw tens of thousands of tickets snapped up during pre-sale.

The second concerts at Melbourne’s AAMI Park on Wednesday 6 December and Sydney’s Qudos Bank Arena on Tuesday 12 December will be the last chance for fans to secure tickets and will be available in the general on-sale on Tuesday 4 July 12noon AEST and 5pm AEST respectively.

Two-time Rock and Roll Hall of Fame inductee, 21-time Grammy Award winner and recipient of The Most Excellent Order of the British Empire Sir Paul McCartney is bringing his acclaimed long-running One On One Tour to Australia and New Zealand this December.

Since launching last year the One on One Tour has played 45 shows in 13 countries to just under 1.5 million people, winning rave reviews from concertgoers and critics alike:

‘In spite of the size of the venues, McCartney and his music forge a personal connection with each and every one in the audience.’ – PopMatters

‘McCartney creates a joy that is boundless both onstage and off.’ – The Washington Times

‘He’s an artist who defined the past, but he’s also an artist unwilling to let go of the future. Rest assured, we’re all the better for it.’ – Consequence of Sound

Irrefutably one of the most successful singer-songwriters and performers of all time, McCartney has soundtracked the lives of generations of fans with the most beloved catalogue in popular music.

The One On One Tour celebrates McCartney’s entire career – from his earliest work with The Quarrymen through to his most recent collaboration with Kanye West and Rihanna – as well as global treasures from The Beatles, Wings and his solo catalogue – there is no shortage of surprises.

The Paul McCartney live experience is everything any music lover could ever want from a rock show — and so much more: Nearly three hours’ worth of the greatest moments from the last 50 years of music, dozens of songs that have formed the soundtracks of our lives.

McCartney and his band have played an unparalleled range of venues and locations: outside the Colosseum in Rome, Moscow’s Red Square, Buckingham Palace, The White House, a free show in Mexico for over 400,000 people, the last ever show at San Francisco’s Candlestick Park where The Beatles played their final concert in 1966, and even one performance broadcast live into Space!

The One On One Tour features a brand new production, as always, utilising state of the art audio and video technology and to ensure an unforgettable experience from every seat in the house. Employing massive screens, lasers, fireworks and, of course, a staggering selection of the best songs ever written or performed, every Paul McCartney show promises a once in a lifetime evening that transcends and elevates the potential of live music.

Make no mistake – McCartney’s One On One Tour will be a once-in-a-lifetime event. Tickets to both Melbourne and Sydney concerts will be available in the general on-sale on Tuesday 4 July noon AEST and 5pm AEST respectively.

PAUL McCARTNEY  – ONE ON ONE TOUR
#OneOnOne

General public on sale from Tuesday 4 July, see timings below